Unlike last December, when mortgage interest rates subsequently plummeted down to near record lows seen in 2012, this time rates have gone the other direction. A forecast for three more rate hikes by the Fed in 2017 are likely to keep rates on an upward trend that began in late October.

Regardless of which mortgage rates survey is used, rates are at their highest level in two-plus years. Freddie Mac reported in its Primary Mortgage Market Survey [1] that the average 30-year FRM to be at 4.30 for the week ending December 22, a 14-basis point increase from the previous week and the highest rate since April 2014. The average 15-year FRM jumped by 15 basis points over-the-week up to 3.52 percent. 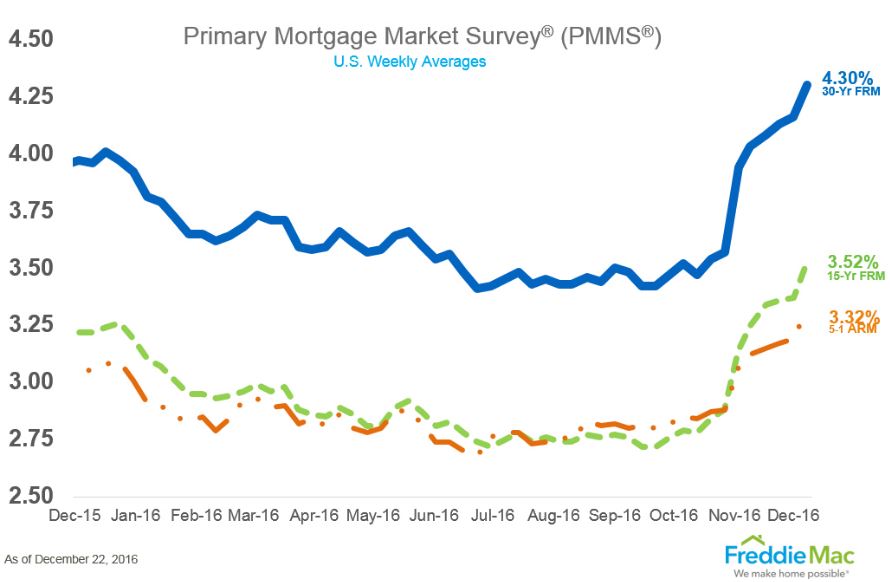 “This week saw another big jump after expectations for three Fed interest rates hikes in 2017—rather than two—were revealed at last week's FOMC meeting,” Bankrate.com stated. “Mortgage rates continue to be driven higher by the consensus forecast of tax cuts and fiscal stimulus that spur faster economic growth and higher inflation in 2017. With investors acting on what appears to be a truly best case scenario, the odds of market volatility and recalibration are growing should the reality not match up to those lofty expectations.”