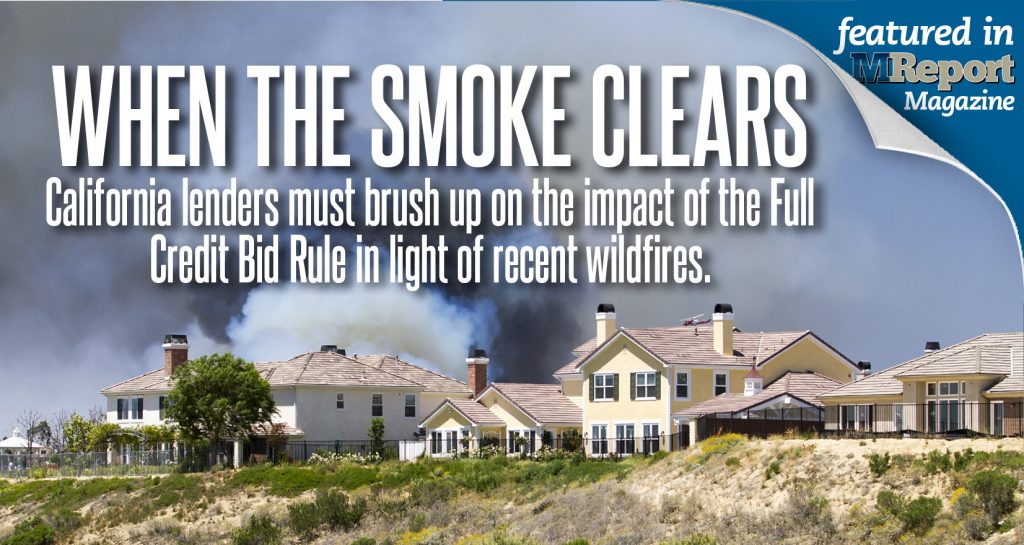 Editor’s note: This feature originally appeared in the January issue of MReport, out now [1].

Recently, multiple wildfires swept across California leaving a wake of destruction in their path. The fires destroyed a multitude of residential properties and the entire Northern California city of Paradise. While foreclosure moratoriums will temporarily stop all foreclosure activity, they will eventually be lifted, giving lenders the option to foreclose on affected properties that serve as security for defaulted loans. Before going to sale on a fire damaged property, lenders should understand the risks created by their foreclosure bids, including, but not limited to, the potential loss of the lender’s right to insurance proceeds.

Rather than show up with cash at its own sale, a foreclosing lender can make a “credit bid” up to the full amount of the borrower’s indebtedness, “since it would be useless to require [the lender] to tender cash which would only be immediately returned to [it].” While the foreclosing lender has the option of bidding up to the full amount of the debt (i.e., a full credit bid), doing so can limit the lender’s right to recover additional amounts due to any impairment of the security. Indeed, a successful full credit bid establishes the value of the real property and prevents the lender from claiming that the property is worth less than the amount of the bid. This concept, created through case law, has become known as the Full Credit Bid Rule.

Under this rigid rule, a full credit bid extinguishes the debt entirely and precludes the lender from recovering any additional amounts to satisfy the debt. If the lender makes a successful full credit bid, it “cannot pursue any other remedy based upon the recovery of any part of the secured debt, or recover from any other security, regardless of the actual value of the property on the date of the sale.” Accordingly, the lender is prohibited from recovering fire or other insurance proceeds payable for pre-sale damage to the property, pre-sale rent proceeds, or even damages for the borrower’s waste. The Full Credit Bid Rule also bars the foreclosing lender from recovering a condemnation award, as well as any amounts that may have been payable from a guarantor of the debt prior to the foreclosure sale. The rule also prohibits a lender from recovering title insurance proceeds. This is because the lender’s only interest in the property (i.e. the repayment of the debt) has been satisfied and extinguished by the full credit bid; the presumption is that any further payment would necessarily result in a double recovery or windfall to the lender.

Due to the preceding, a lender making a credit bid at a foreclosure sale must be conscientious of its potential rights to rents, additional or supplemental security, insurance proceeds, and/or any damages caused by the borrower’s waste. As stated best by the California Supreme Court, “[t]he lender, perhaps more than a third party purchaser with fewer resources with which to gain insight into the property’s value, generally bears the burden and risk of making an informed bid.” California courts have consistently held that the purchaser at a foreclosure sale has the duty to assess the value of property correctly.

The Full Credit Bid Rule can result in harsh consequences for a lender who makes a successful full credit bid on real property with a substantially lower fair market value. It is well established that a lender who purchases an encumbered property at a foreclosure sale by making a full credit bid is not entitled to insurance proceeds payable for pre-foreclosure damage.

What the Case Law Shows

In Altus Bank v. State Farm Fire & Cas. Co., the court relied on the Full Credit Bid Rule to prohibit the lender from recovering any insurance proceeds resulting from a pre-sale fire that destroyed the residence on the property. Despite the fact that the lender made a claim under the insurance policy prior to the sale and maintained that the full credit bid was a mistake, the court held that the lender was wholly barred from recovering anything based on the diminution of value of the property that secured the loan because the credit bid established the value of the property and extinguished the debt in full. The court further noted that it was unreasonable for the lender to “acquire the mortgaged property by choking-off any offers in the range of the true value of the property with a preemptive bid and then . . . assert that its insurance loss was measured by anything other than the price which it bid at auction to acquire the property.”

Similarly in Bank of America v. Quackenbush, the Court held that the lender could not recover against an insurer that issued financial guarantee bonds as additional security for a pool of high-risk loans after the lender inadvertently made full credit bids on the properties in question, even though the originating lender grossly overinflated the property values in a scheme to defraud investors. In Quackenbush, the Court concluded that it was reasonable to hold the lender to the Full Credit Bid Rule because the lender “controlled the timing of the sales and admittedly knew the true value of the properties [and] nothing precluded it from bidding less than the amount it was owed.” As a result, the lender ultimately sustained a loss of approximately $12 million, which it could not recoup.

Adding insult to injury, lenders who have tried to rescind or reform the foreclosure sale in an effort to avoid the effect of the Full Credit Bid Rule, are rarely successful. In Universal Mortgage Co., Inc. v. Prudential Ins. Co., the foreclosing lender made a successful full credit bid based on its agent’s external observations of the property. However, it was subsequently discovered that the interior had extensive damage due to the borrower’s removal of most of the fixtures and appliances. The lender sued the insurer, who denied the lender’s claim under the operative insurance policy in reliance upon the Full Credit Bid Rule. The lender sought to amend its complaint to allege a cause of action for reformation of the trustee’s deed to reflect a lower bid; however, the trial court denied this request and judgment was ultimately entered in favor of the insurer.

On appeal, the Ninth Circuit upheld the judgment and denial of leave to amend, reasoning that reformation was not a proper remedy under the circumstances since “there was no mistake” because the lender intended to make the full credit bid based on its exterior inspection. The court further held that the lender’s lack of actual or constructive knowledge of a loss at the time of a full credit bid was irrelevant to the policy or application of the Full Credit Bid Rule.

Even something short of a full credit bid can have dangerous consequences. As explained above, the credit bid at the foreclosure sale establishes the value of the property for purposes of recovering fire or other additional proceeds. Therefore, a bid of $300,000 when the amount owed is $500,000, effectively limits the lenders’ right to recovery insurance proceeds to $200,000 [$500,000 less the established value of the property ($300,000)]. Accordingly, it’s important to establish an accurate bid, after factoring in the extent of the damage to the property.

Exceptions to the Rule

Despite the harsh consequences of a full credit or other limiting bids, the courts have only carved out two limited exceptions. The first exception applies where the lender’s full credit bid is induced by the lender’s reliance upon fraudulent misrepresentations. In Alliance Mortgage Co. v. Rothwell, the lender sued a real estate appraiser and a broker, among others, claiming that they fraudulently induced the lender to originate several loans secured by properties that were insufficient collateral for the debt. The California Supreme Court identified an exception to the Full Credit Bid Rule, holding fraud claims against third parties who fraudulently induced the lender to make the loans were not barred by the Full Credit Bid Rule. However, this is a limited exception. Absent fraud affecting the bid, the Full Credit Bid Rule will apply.

The second limited exception applies where the lender incurs damages caused by negligent construction of improvements. Under these circumstances, the lender may be entitled to recover damages even though it has purchased the property at a trustee’s sale following a full credit bid. In Sumitomo Bank v. Taurus Developers, Inc., the foreclosing lender discovered several latent defects on the property due to faulty construction and brought suit against the borrower/developer for failing to adequately oversee the construction and notify the lender of the defects known to him. While the Court held that the lender could not recover based upon fraud, bad-faith waste, or breach of contract, it found that a cause of action for negligence could be maintained by the lender regardless of its full credit bid.

Given the strict nature and application of California’s Full Credit Bid Rule and its minimal exceptions, it is imperative that lenders consider every potential source of recovery on the unpaid debt before making a credit bid at a foreclosure sale. A failure to do so will limit or completely deny the lender’s ability to recover insurance or other proceeds that would otherwise help offset its loss. Thus, where property values have been affected by natural disasters, such as those destroyed in the recent California wildfires, lenders and their servicers should consider the damage to the property, the value of the property in its current state and the amount of available insurance proceeds in determining its intended credit bid at the foreclosure sale.