According to the National Association of Realtors' latest quarterly report, Q1 of 2022 found more markets reaching double-digit annual price gains than the previous quarter. Meanwhile, approximately 70% of 185 measured metros experienced such price gains – up from 66% in Q4 of 2021.

These increases come as median single-family existing-home prices grew at a faster rate nationwide from nearly 16% one year ago, up to $368,200. In comparison, the year-over-year pace in the prior quarter was 14.3%. The South region made up 45% of single-family existing-home sales in Q1, and gained a double-digit price appreciation of 20.1%. The Northeast only experienced an increase of 6.7%, the Midwest rose to 8.5%, and the West increased to an estimated 6%. 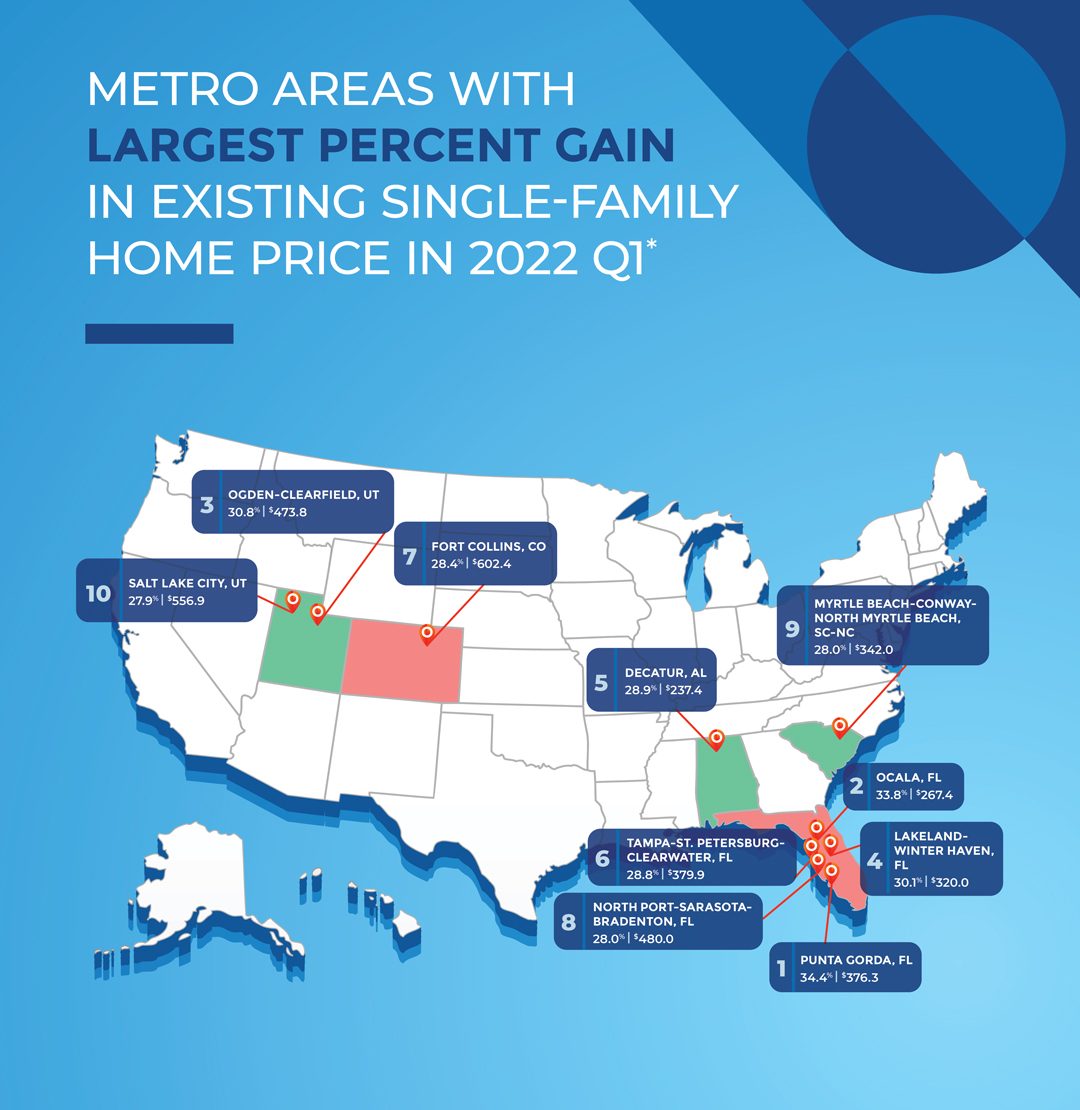 "Prices throughout the country have surged for the better part of two years, including in the first quarter of 2022," said Lawrence Yun, NAR Chief Economist. "Given the extremely low inventory, we're unlikely to see price declines, but appreciation should slow in the coming months."

Yun hints that his prediction is based on an expectation of further supply for the upcoming quarter, citing that the beginning of Q1 recorded a record-low amount of inventory.

"I expect more pullback in housing demand as mortgage rates take a heavier toll on affordability," said Yun. "There are no indications that rates will ease anytime soon."

The top 10 areas with the highest year-over-year price gains were made up of midsize and small markets, including:

"Traditionally, homes in these markets were viewed as relatively inexpensive, but with recent migration trends, prices have increased significantly," Yun said. "As more families relocate to various areas, we may see some surprising markets on our top 10 list. Price gains in many smaller, tertiary cities are now outpacing those in the more expensive primary and secondary markets. This is due to buyers looking for less expensive housing and also a result of more opportunities to work from home, making relocation to smaller markets possible."

The top 10 most expensive markets were in California, including:

With sustained price appreciation and higher mortgage rates, affordability worsened drastically in Q1 of 2022. The monthly mortgage payment on a typical existing single-family home with a 20% down payment rose to $1,383, up 30% from one year ago. Families typically spent nearly 20% of their income on mortgage payments, compared to 14.2% a year ago.

"Declining affordability is always the most problematic to first-time buyers, who have no home to leverage, and it remains challenging for moderate-income potential buyers, as well," said Yun.

During Q1, a home purchase was seen as unaffordable for a first-time buyer intending to purchase a typical home. The mortgage payment on a 10% down payment loan on a typical starter home valued at $313,000 rose to $1,363. That is an increase of 30% from a year ago.

First-time buyers typically spent 28.4% of their family income on mortgage payments, making a home purchase unaffordable. A mortgage is considered unaffordable if the monthly payment – principal and interest –  amounts to over 25% of the family's income.