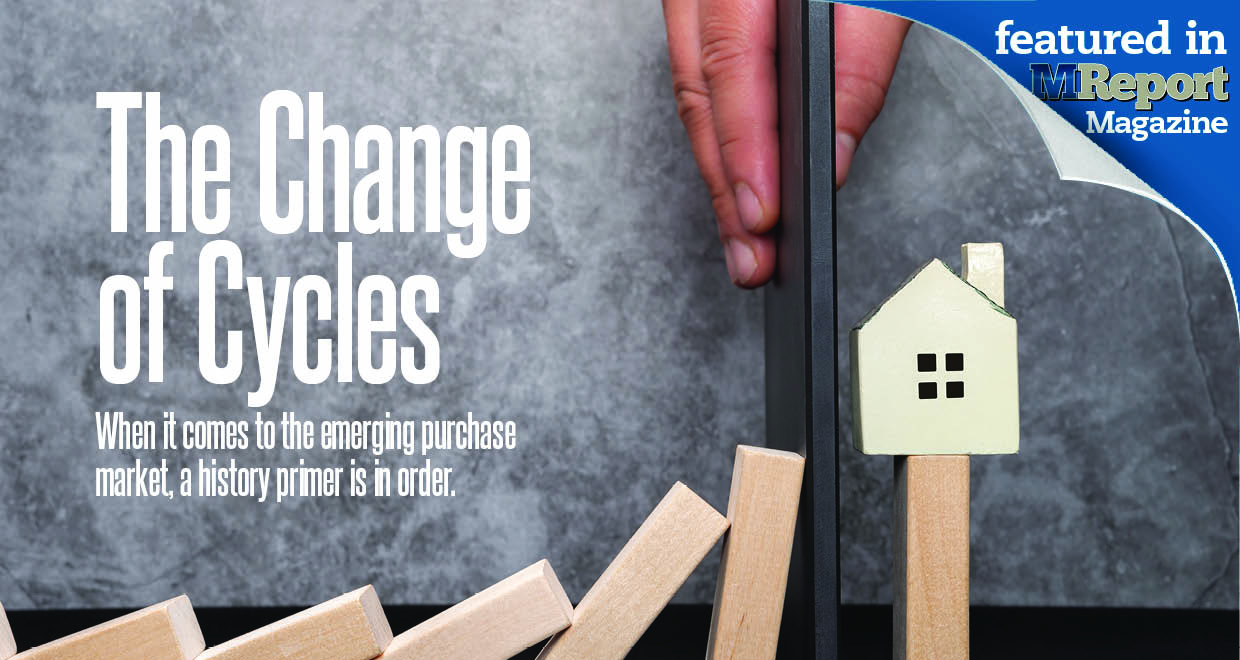 From the tone of some of the conversations I’ve been hearing over the past six months, one would anticipate that a recession—or at least, what we used to call a “counter cycle,” or default/REO surge in the market—was coming. However, if it hasn’t already come to pass by the time this piece is published, it will very soon. No, not a recession. No, not an economic catastrophe. A purchase market cycle.

At times, I think today’s industry has been a bit too dramatic about the difference between a refinance cycle and a purchase-dominated cycle. Admittedly, 2020 was breathtaking. There was virtually no need for marketing. The biggest challenge to our industry was finding a way to capture all the refinance orders and close them before fallout could occur.

However, I believe we should be welcoming a strong purchase cycle rather than cursing it. It’s almost impossible (although 2020 probably taught us that almost nothing is impossible when it comes to interest rates) that we’ll see a replay of last year’s extraordinary volume again. Too many market and general economic factors are coming together to support the refinance wagon much longer—at least, not at the levels we saw last year. Nevertheless, many respected economists are also telling us that home values and home sales will continue to climb over the coming months. That’s not an emerging threat; that’s an opportunity.

If you don’t believe me, let’s have a look back to a time many in this industry—except those of us who lived through it—seem to have forgotten.

A History Primer, by the Numbers
My premise is simple. If you don’t believe a lender can be successful, even very successful, without the occurrence of a refinance market, you aren’t aware of the headwinds the mortgage lending industry faced in the 1980’s.

I’ll also make the following disclaimer for my argument: we live in a starkly different regulatory environment today than we did in the 1980s.

Deregulation was only beginning. Glass-Steagall was still the law of the land. However, the point still bears consideration: if lenders could succeed in the environment they faced in the early 1980s, and then again in the late ‘80s, they certainly can succeed in 2021.

Let’s start with the numbers, and these are taken directly from Fannie Mae research (Monthly Commitment Rate and Points on 30-year Fixed-Rate Mortgages Since 1971).

December 2020 bore witness to the lowest general interest rates for 30-year fixed loans in modern American history, at 2.68% and .7 points. As whispers of the end of the refinance boom and climbing rates began to mount at the beginning of 2021, we nonetheless stood at 3.06% just four months later in April 2021.

For comparison’s sake, the typical 30-year fixed mortgage stood at 8.52% (1.0 points) in May 2000, on the eve of what had been our biggest refinance boom in history (until last year). Nonetheless, through 2004–2006, that rate held steady between 5.5% and 6.5%, numbers that quite well could induce a market panic if forecast today.

Now, let’s dive deeper into the numbers. Some of the industry’s elder statesmen recall the brutal days of the Savings & Loan Crisis, speaking of interest rates that would make an originator’s blood run cold today. By the same Fannie Mae metrics, we saw an average of 11.05% in April 1989 (2.2 points), as that crisis was breaking.

But that wasn’t the worst of it.

Based on Fannie Mae’s numbers, our highest monthly average commitment rate on a 30-year fixed loan (since 1971) happened in January 1982, at a whopping 17.48% (2.2 points). That’s almost six times higher than the 2021 numbers that have some wringing their hands today. When the mortgage lending executives of 1982 looked longingly back to the “good old days,” they saw an average 8.72% rate (January 1977). Imagine predicting today an average 30-year fixed around 8% for 2022.

Of course, the early 1980s were a very different time for the American economy. In addition to the regulatory landscape, we were amid an oil crisis and a period of unprecedented (at that time) federal spending. Inflation was the dominant factor. However, the fact remains that mortgage lenders in that era were trying to maintain profitability while issuing traditional purchase mortgage loans at interest rates in the low to mid-teens.

And yet, they did!

As deregulation and other economic influences drove inflation down throughout the mid-1980s, the new threat to mortgage lending became the Savings and Loan crisis. Nonetheless, as that scenario unfolded toward the end of the decade and rates held steady around 10%, significant numbers of lenders continued to succeed despite the continued headwinds. In fact, total origination volume for single-family loans increased from $246.8 billion in 1985 to $352 billion in 1989, and this as inflation receded. (Source: U.S. Dept. of Housing and Urban Development, Office of Financial Management, Survey of Mortgage Lending Activity).

The Lesson
So, how did lenders facing such unsightly rates manage to grow mortgage volume and remain successful in the wake of the Savings and Loan crisis and continued high interest rates? Part of the answer, at least, lies in adaptation and competition. As the S&Ls toppled from their position atop the market share charts, commercial banks (and others) moved in to win their share. Savings and Loan Associations held 44.3% of the single-family loan origination market in 1985, but that fell to 38.2% in four short years.

In contrast, commercial banks clawed from 20.9% of the market to 35% in 1989. (Source: Peter S. Rose and Richard L. Haney, Jr., “The Players in the Primary Mortgage Market,” Journal of Housing Research, Vol. 1, Issue 1, Page. 91.) Yes, a slew of other variables and developments played a role in that market shift. And yes, it would be an oversimplification to suggest we’re in any position like the economy and market of the 1980s. It’s highly unlikely that we’ll see a 10% 30-year-fixed rate any time soon, much less one approaching 20%. Originators face an entirely different set of operating conditions in 2021 than they did 30 to 40 years ago.

Regardless, the overall lesson in contrasts remains. This industry has faced much more intimidating challenges before, and it successfully persevered. Right now, the leading lenders that I know are shifting their strategic focus from the top line of the P&L to the bottom line, getting their efficiencies in order. They’re implementing strategic marketing plans to win share. They’re even reviewing their product mixes in anticipation of not only a changing environment but also changing demographics.

The moral of the story is that the mortgage lending industry has always been cyclical. Its leading participants have always anticipated and prepared for change. Perhaps we got a little too comfortable with the seemingly endless refinance boom and the steady trickle of easy origination. That doesn’t mean there’s no time to prepare to compete once again.

After all, we’ve done it before.