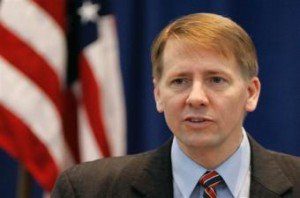 The future of the Consumer Finance Protection Bureau [1] (CFPB) under the Trump administration is unknown. Several Republican lawmakers, who are not too fond of Dodd-Frank, much less the CFPB, are taking new aim at the bureau, just as talk of a replacement for Richard Cordray as the new head of the bureau is warming up.

Last week, a memo from Rep. Jeb Hensarling (R-Texas), chairman of the House Financial Services Committee, outlined plans to dismantle key aspects of the CFPB, such as its ability to police the private sector and its consumer complaints database. The memo also outlined a plan to change how the director position could be filled and replaced.

As it stands, the director is appointed to a term of five years and can only be ousted “for cause,” as opposed to on any political inclinations. CFPB is an independent agency, meaning the White House has little authority over opts machinations.

Cordray’s term ends in 2018, unless Hensarling’s bill gets through congress and the rules are rewritten. He’s expected to introduce the legislation soon.

A year ahead, and all still very much just talk at this point, the administration and Congress are taking a look at who could replace Cordray. The latest name to enter consideration is Brian Brooks, general counsel at Fannie Mae.

What’s causing concern among critics already is that Brooks has close ties to Treasury secretary nominee Steven Mnuchin and a bank accused openly of discrimination and aggressive foreclosure practices during the crisis.

According to CNBC [2], Brooks represented several investors in Mnuchin's $1.6 billion purchase of IndyMac, a failed subprime mortgage lender, in 2009. The lender was renamed OneWest, where Brooks became vice chairman. Democrats and consumer groups have attacked the choice of Mnuchin for his role in OneWest, which is now part of CIT Group [3]. Sen. Elizabeth Warren (D-Mass.), who helped establish the CFPB, even said the bank was belligerent and cruel.

Brooks has been with Fannie Mae since 2014 and is one of several names being tossed about as a potential replacement. Others include former Texas congressman Randy Neugebauer, who was an open critic of the CFPB, and Todd Zywicki, an economist at the Mercatus Center at George Mason University [4].