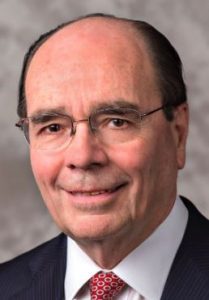 James B. Lockhart III, Vice Chairman of W.L. Ross & Co. LLC and former Director of the Federal Housing Finance Agency, will deliver the morning keynote address at the 2017 Five Star Government Forum in Washington, D.C., in April, according to an announcement from the Five Star Institute.

Lockhart’s distinguished career includes an extensive background in financial services management and serving in a series of presidential-appointed and Senate-confirmed housing-related positions with the U.S. Government. In 2006, he was nominated by President George W. Bush for the position of Director of the Office of Federal Housing Enterprise Oversight, which is now a part of the FHFA. In 2008, Lockhart helped create the FHFA and served as the Agency’s Director and Chairman of the Oversight Board.

“We are honored to have a respected and accomplished leader of Mr. Lockhart’s caliber join us at the Five Star Government Forum,” said Five Star Institute President and CEO Ed Delgado. “Jim’s unique background and expertise will provide attendees the opportunity to gain valuable insight into the economy and the housing industry as we transition to the new administration.”

Other government positions Lockhart has held include Director of the Financial Stability Oversight Board; Deputy Commissioner and COO of the Social Security Administration and Secretary to the Social Security Board of Trustees; serving on George W. Bush’s Management Council and on its Executive Committee; and CEO of the Pension Benefit Guarantee Corporation during the George H.W. Bush Administration.

In the private sector, Lockhart co-founded and served as Managing Director of NetRisk, a risk-management software and consulting firm.

Lockhart has a bachelor’s degree from Yale University and a master’s degree from the Harvard Graduate School of Business Administration. While in the Navy, he served on a nuclear submarine as an officer.

Previous: Now That a Real Estate Developer is President-Elect . . .
Next: Home Prices ‘Soaring’ Toward Peak Levels