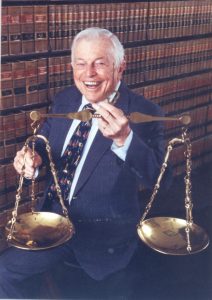 Baker Donelson recently announced the passing of Lewis Donelson, senior counsel and co-founder of the firm. Donelson, was 100 years old. He is survived by his children Lewis IV, Janice and Loring, four grandchildren and one great-grandchild.

A native of Memphis, Donelson earned his law degree from Georgetown University Law Center. In 1954, he founded the Memphis law firm of Donelson & Adams, with a vision to create a full-service firm with broad scale expertise. More than 60 years later, that vision was realized in Baker Donelson becoming a firm with more than 750 attorneys and public policy advisors in 23 offices across 10 states and in Washington, D.C.

“In a career that spanned more than 70 years, Lewie's leadership and activism had a lasting and far-reaching impact. While we're extremely saddened by his passing, we're proud to be a part of Lewie's legacy and are committed to carry on the spirit of dedication and community that he exemplified and that is at the core of the culture and personality of Baker Donelson,” said Ben C. Adams Jr., Chairman and CEO of Baker Donelson

In his practice, which focused on corporate and tax law, Donelson formed the first professional limited liability company in Tennessee and established some of the earliest private pension and profit-sharing plans. He won one of the first family partnership tax cases involving multiple corporations, and many others.

Beyond his legal career, Donelson was known for his lifelong political involvement at the local, state and national levels. He also played an active leadership role in the community, giving his time and energy to numerous organizations, serving on the boards of St. Jude Children's Research Hospital and the National Rural Schools Trust, and as chair of the National Advisory Council for The Hermitage, the home of President Andrew Jackson.

Previous: The Week Ahead: Checking in on Existing Home Sales
Next: Back to Business: Congress Passes Funding Resolution