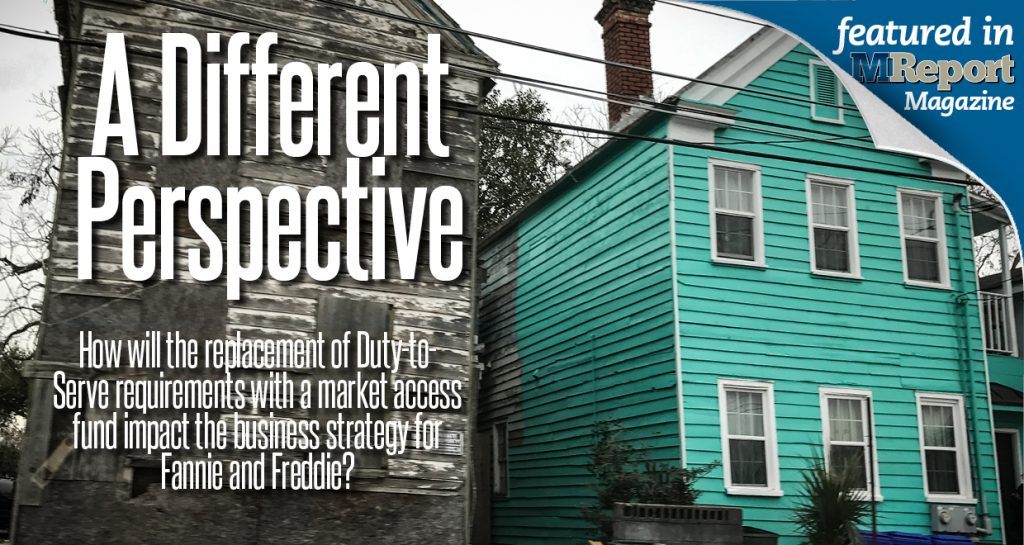 Editor’s note: This feature originally appeared in a recent issue of MReport.

Plans for reform of Fannie Mae and Freddie Mac have been diverse and numerous following the completion of the federal bailout of the two mortgage giants and the creation of the Federal Housing Finance Agency (FHFA) in 2008.

Several developments in the first half of 2019 have renewed interest in the future of Fannie Mae and Freddie Mac (the government sponsored enterprises, or “GSEs”). First, in February, Sen. Mike Crapo, Chairman of the Senate Banking Committee, released an outline of significant reform to the housing finance system that called for the privatization of the GSEs. Second, in March, the Trump administration issued a memorandum directing the Department of Treasury and the Department of Housing and Urban Development (HUD) to develop options for housing finance reform. Finally, the April confirmation of Mark Calabria to lead FHFA was preceded by Senate hearings in which the reform of the GSEs featured heavily.

One central element for any reform plan is the extent to which the GSEs will become either more like a public utility, an ordinary branch of the federal government, or a private corporation, competing with other entities in the business of guaranteeing payment on mortgage-backed securities (MBS). Additionally, an important element of the debate amongst would-be reformers is whether the Duty-to-Serve (DTS) requirements will continue to be imposed on the GSEs or any other corporation competing with them in the secondary mortgage market.

The current DTS requirements originated in the Federal Housing Enterprises Financial Safety and Soundness Act of 1992. The Act mandated the establishment of goals for the GSEs for purchase of mortgages securing loans to the low- and moderate income families. Congress determined that it was necessary to increase those duties when it enacted the Housing and Economic Recovery Act of 2008 (HERA). While creating FHFA to oversee the GSEs through conservatorship, it mandated that the GSEs develop loan products and underwriting guidelines to facilitate a secondary market for mortgages securing loans to the underserved markets. The underserved markets were identified as low- and- moderate-income households, targeting three specific areas: manufactured housing, affordable housing preservation, and rural housing. Under HERA, FHFA was responsible for creating a process for evaluating whether the GSEs were fulfilling their “duty to serve” mandates for the identified markets.

After some delay, in 2016, FHFA issued a final rule to implement the DTS statutory mandates. The next year, FHFA approved separate DTS plans for Fannie and Freddie, with the execution of the programs to start at the beginning of 2018. Fannie’s and Freddie’s DTS plans are lengthy and include dozens of distinct proposals, each appearing under one of the three DTS target areas of manufactured housing, affordable housing preservation, and rural housing.

While it is difficult to sum up the GSEs’ DTS programs, several of the programs are a commitment to the purchase of loans originating in various federal programs, or from small financial institutions, or secured by a particular type of housing. For example, Fannie’s Affordable Housing Preservation goals include a commitment to the purchase of mortgages secured by properties involved in the Section 8 and Low-income Housing Tax Credit programs.

Its Rural Housing objectives include increasing the purchase of loans from “high-needs rural regions” and those secured by “multifamily housing for Native Americans and agricultural workers.” In addition to loan purchases, the GSEs’ DTS plans commit to conduct research on underserved markets, outreach to various market participants, and to development of new loan programs. Two examples may serve to illustrate:  Freddie’s plan promises to develop a “rural property mapping tool” to more accurately pinpoint high-needs rural areas and release some components of the tool for public use. Freddie believes the mapping tool “lays the groundwork for other rural lending activities,” because it will “allow for the better focusing of private capital in rural areas.”

The Impact of Replacement

The major headline of Sen. Mike Crapo’s three-page outline for housing finance reform envisions the future Fannie and Freddie as private corporations, competing with other secondary market participants, and able to fail. The former GSEs would still guarantee timely payments to investors of MBS in exchange for a fee. Moreover, as part of privatization, the DTS requirements would no longer be imposed.

In their place will be a Market Asset Fund (MAF). The purpose of the MAF is to “provide grants, loans, and credit enhancement to address the homeownership and rental housing needs in underserved and low-income communities.” Funding for the MAF will be derived from an annual assessment of 10 basis points (one-tenth of 1%) of the total annual loan volume guaranteed by each guarantor. The Crapo outline offers no further details regarding the MAF.

The MAF is not entirely a new concept. It was one component of the Corker-Warner mortgage reform proposal circulated in 2018. According to that 2018 proposal, the MAF would be used to assist underserved borrowers to purchase homes with down payment assistance, interest rate reductions, providing mortgage insurance, the funding of home repairs, housing counsel, and loss mitigation activities. Corker-Warner gave the administration of the MAF to FHFA, requiring the agency to develop yearly plans for the payments from the Fund.

One of the best sources of advocacy for the concept of replacing the DTS requirements with the MAF is “Access and Affordability in the New Housing Finance System,” written by Jim Parrott, Michael Stegman, Phillip Swagel, and Mark Zandi in 2018. In discussing the MAF as it appeared in the CorkerWarner draft bill, the authors asserted that the idea possessed greater benefits to the public than DTS provides under the current system. No longer will assistance to low-to-moderate income (LMI) loan groups be achieved by crosssubsidization—that is charging higher risk loans the same level of pricing as lower risk loans outside of the LMI market. The private guarantors of the future would be able to set pricing of guarantee fees to truly match the risk of the default new borrowers pose, presumably reducing the cost of mortgage loans to many low-risk borrowers. In place of the cross-subsidy, guarantors will fund a program that is dedicated to assisting LMI borrowers—the MAF. The MAF would be purely dedicated to LMI borrowers, even those with solid credit history.

The current system, on the other hand, may benefit highrisk, high-income borrowers to the detriment of low-risk LMI borrowers. Also, the MAF may better address impediments to homeownership by addressing not only mortgage payments, but also providing down payment assistance, post-purchase expenses, and counseling as to housing options. Finally, the authors determined that under the proposed system, the average LMI borrowers would benefit more, “with a savings of 29 basis points in their interest rates relative to the system we have today.”

It is worth noting that one of the authors, Mark Zandi, Chief Economist of Moody’s Analytics, appeared before Housing Banking and Urban Affairs committee in late March, shortly after the Crapo outline was released. He commented positively on the Crapo’s proposal generally but cited his group’s 2018 finding that the MAF would generate more than $5 billion a year to lower housing costs for LMI borrowers, which is more than the current system provides.

The idea of a housing system without the DTS mandates imposed on future guarantors has its critics. Andrew Jakabovics, VP for Policy Development at Enterprise Community Partners and former senior advisor at HUD, criticized the arrangement for separating lending to LMI borrowers from the normal course of the housing finance business (“Understanding the Latest Housing Finance Reform Outline,” February 6, 2019, available at enterprisecommunity.org). Jakabovics argued that “the housing finance system should be designed from the start to serve eligible borrowers of modest and mid-priced homes in the normal course of business and without special programs[.]” Jakabovics would maintain DTSstyle requirements on the future Fannie and Freddie, and any other guarantors who enter into competition with them.

Other concerns were expressed when the Senate Banking, Housing & Urban Affairs Committee held hearings on Crapo’s proposal on March 26-27. In her opening statement, Carrie Hunt of The National Association of Federally-Insured Credit Unions expressed that the current housing finance system is working for credit unions, so any changes need to be made cautiously. While not directly critical of the Crapo plan in her prepared statement, she urged any new system of housing finance needs to maintain DTS’ specific concerns for manufactured housing, affordable housing preservation, and rural markets.

Hilary Shelton, Director to the NAACP’s Washington Bureau and SVP for Policy and Advocacy, was also critical in his opening statement before the committee. He worried that without DTS provisions that “most, if not all, housing capital will go to the ‘cream of the crop’ mortgages,” while ignoring LMI borrowers. Shelton undoubtedly was referring to the MAF as envisioned in the Crapo plan when he stated that authorization of money to alleviate housing problems is insufficient because “even when money is appropriated it can easily be slated to be taken away.” Upon questioning from Senator (and presidential candidate) Elizabeth Warren, Shelton asserted that LMI borrowers would be worse off under the Crapo plan.

Over the years, there have been various plans discussed and proposed, and yet there has not been a consensus as to what the next step should be with the conservatorship. The next development in the saga of GSE reform may be the release of Treasury’s housing finance reform plan, to be guided by the President’s memorandum released last March. That memorandum was silent as to the retention of DTS or the creation of a MAF.

Regardless, the introduction of the Crapo plan has at least reignited the conversation, but given the various opinions on the topic, and the nature of the political theatre in this day and age, it seems unlikely that reform is in the near future. However, what does seem clear is that any new reform plan will have to address the DTS requirement and the extent to which future participants in the secondary mortgage market make lending to underserved markets a central component of their business, or leave such tasks to direct government involvement and spending through a Market Access Fund or something similar. Both sides have compelling arguments for replacing or enhancing the duty to serve requirement.

Brian Yoho serves as Senior Attorney in Foreclosure and Title at Schneiderman & Sherman, P.C. Yoho has spent his legal career in the area of mortgage default, with experience in bankruptcy, loss mitigation, consumer finance regulation, and litigation, as well as foreclosure and title. He is admitted to practice in the Eastern and Western Districts of Michigan. Yoho obtained his juris doctorate in 2003 from the Ave Maria School of Law and his Bachelor of Arts from Erskine College in 1996.