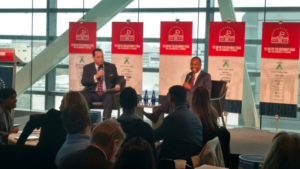 Ed Delgado, President and CEO of the Five Star Institute, and Ben Carson, Secretary of the Department of Housing and Urban Development, speaking together at the 2018 Five Star Government Forum.

The 2019 Five Star Government Forum has been announced and will take place this coming April 23 in Washington, D.C. Now in its 10th year, the Five Star Government Forum is renown for its impactful engagement of leaders across the mortgage industry. The day-long event has since its inception helped facilitate a meaningful back-and-forth that plays a role in ensuring sensible regulations are maintained to protect both homeowners and the housing market.

Government officials and mortgage servicing leaders will gather at the Newseum, where the event was held last year, located between the U.S. Capitol and the White House, only a single block from the National Mall. Representatives from the Bureau of Consumer Financial Protection (BCFP), the U.S. Department of Housing and Urban Development (HUD), the Federal Housing Finance Agency (FHFA), and many others are expected to attend.

2018’s Five Star Government Forum began with U.S. Secretary of HUD Dr. Benjamin Carson in conversation with attendees. Peter J. Wallison, Senior Fellow and Arthur F. Burns Fellow with the American Institute, presented the 2018 morning keynote. The Hon. Edward DeMarco, who served as the acting Director of the FHFA from 2009 to 2014, led the afternoon keynote.

“Over the past 10 years, the Five Star Government Forum has established itself as a critical event for our industry because it serves as a platform to foster and grow the collaborative working relationship between regulatory authorities and the industry stakeholders,” said Ed Delgado, President, and CEO of the Five Star Institute. “We look forward to hosting the conversations that drive progress once again.”