Housing prices continued to rise in November and are expected to keep rising until the coming November, according to the latest CoreLogic U.S. Home Price Insights (HPI) report released Tuesday.

November sales were up 7 percent compared to a year ago, and up 1 percent from October. CoreLogic expects a relatively flat 0.1 percent growth in housing prices from November to December. It also expects prices to increase by close to 5 percent in November 2017, when compared to November 2016.

Only Connecticut saw home prices drop compared to November 2016. Connecticut prices were down half a percent. Wyoming, Alaska, and Delaware were largely flat, with increase rates below 1 percent.

Frank Nothaft, chief economist at CoreLogic, said this past year’s price growth is an offshoot of still-low mortgage rates. But that should slow.

“Last summer’s mortgage rates sparked demand,” Nothaft said. “With for-sale inventories low, the result has been a pickup in home-price growth,” said. “With mortgage rates higher today and expected to rise even further in 2017, our national Home Price Index is expected to slow to 4.7 percent year over year by November.”

Anand Nallathambi, president and CEO of CoreLogic, said that “Home prices in 27 states ended November above their pre-crisis peak levels. Nationally, the CoreLogic Home Price Index remains 4 percent below its April 2006 peak, but should surpass that peak by the end of 2017.” 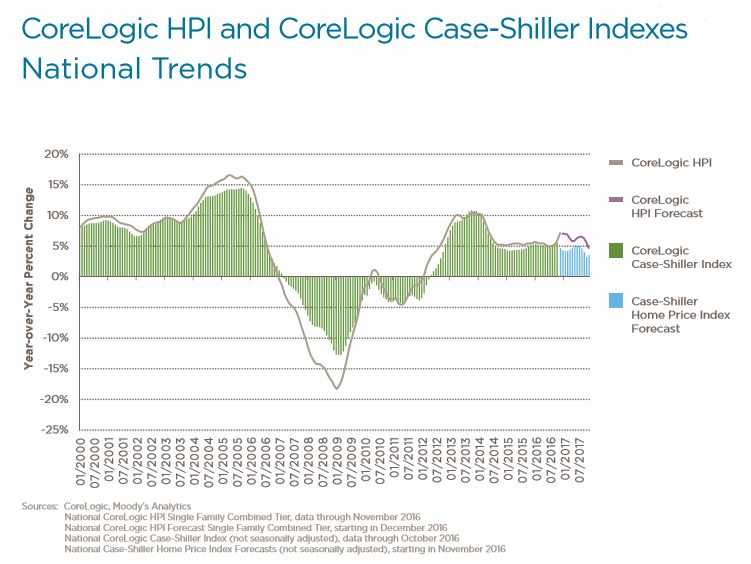 The latest S&P CoreLogic Case-Shiller National Index, released at the end of December, showed similar results in price growth for October—year-over-year growth of 5.6 percent, up from 5.4 percent a month earlier. The greatest over-the-year appreciation occurred in Seattle, Portland, and Denver. Seattle’s growth for October came in at 10.7 percent.

While the home price growth has been healthy over the last four-plus years, it came with a caveat.

Blitzer continued, “After the S&P CoreLogic Case-Shiller National Index bottomed in February 2012, its year-over-year growth accelerated to a peak rate of 10.9 percent in October 2013 and then gradually fell to its current rate of approximately 5 percent. During the same period, the highest year-over-year rate from any city was 29 percent in August and September 2013; currently the highest single city gain declined to approximately 11 percent. Both national and city growth in home prices slowed but remains above the growth rate of incomes and inflation.”

Click here to view the entire CoreLogic HPI for November 2016.