Where Americans Moved in 2022

The map highlights the association between southern states lessening COVID-19 restrictions first in 2020, as well as lower tax rates, which Americans, coupled with warmer temperatures, may find appealing.

Illinois is Top Outbound State for 9 Years in a Row

Since 2014, Illinois has been the top state for outbound moves, according to the Moving Migration Report. Other leading outbound states include New Jersey and Pennsylvania, both of which have remained on the list for more than a decade. Neighbor released information stating that 78% of Americans are reducing their spending this holiday season. With the surge in inflation and the competitive housing market that is currently in play, many are cutting back on expenses to make ends meet. One of the biggest expenses Americans face are income and property taxes. Reducing those can have a significant impact on a family’s budget.

California and New York sit towards the top of the highest cost of living lists in the United States. To find affordable housing and provide a higher quality of life for their families, people are branching out of expensive states and cities or urban areas.

While houses still sell for top dollar in many areas, the competition has lessened. Many who are listing homes in top metro locations are finding that there are fewer showings than in previous years. The increase in cost is pushing prospective buyers into rural areas for homeownership. With affordability and quality of life top of mind, buyers are more likely to forgo convenience for lower taxes and home prices.

Quality of Life Is the Top Concern for Movers in 2022

After experiencing several years of uncertainty, many are on the hunt for somewhere to settle that provides a higher quality of life than they previously had. For many, that means finding a home that is nestled in nature and allows for ample outdoor experiences. Others are relocating to be near family.

One of the driving forces behind this trend is the continuance of remote work. After numerous companies implemented this structure during the pandemic, workers realized they could successfully fulfill their work obligations away from the office. Given that, they are choosing to reside in locations where they can get more bang for their buck. Helping to continue the work from home trend is the fact that many companies downsized their corporate office space during the pandemic, resulting in less office space for their employees to work from. Whether or not the work from home trend will be one the majority of companies ascribe to long term remains to be seen.

Having your residence in certain states requires you to pay a higher income tax than what you are liable for in others. Something the two top outbound states have in common is that they have some of the highest tax rates in the country.

Those in California and New Jersey have long dealt with tax rates that are in the highest percentage in the United States. These levels take away from a person’s overall income and leave fewer funds for discretionary spending and investments. Owning property, along with property taxes, is part of this equation as well and another top reason for people moving to lower tax liability states. 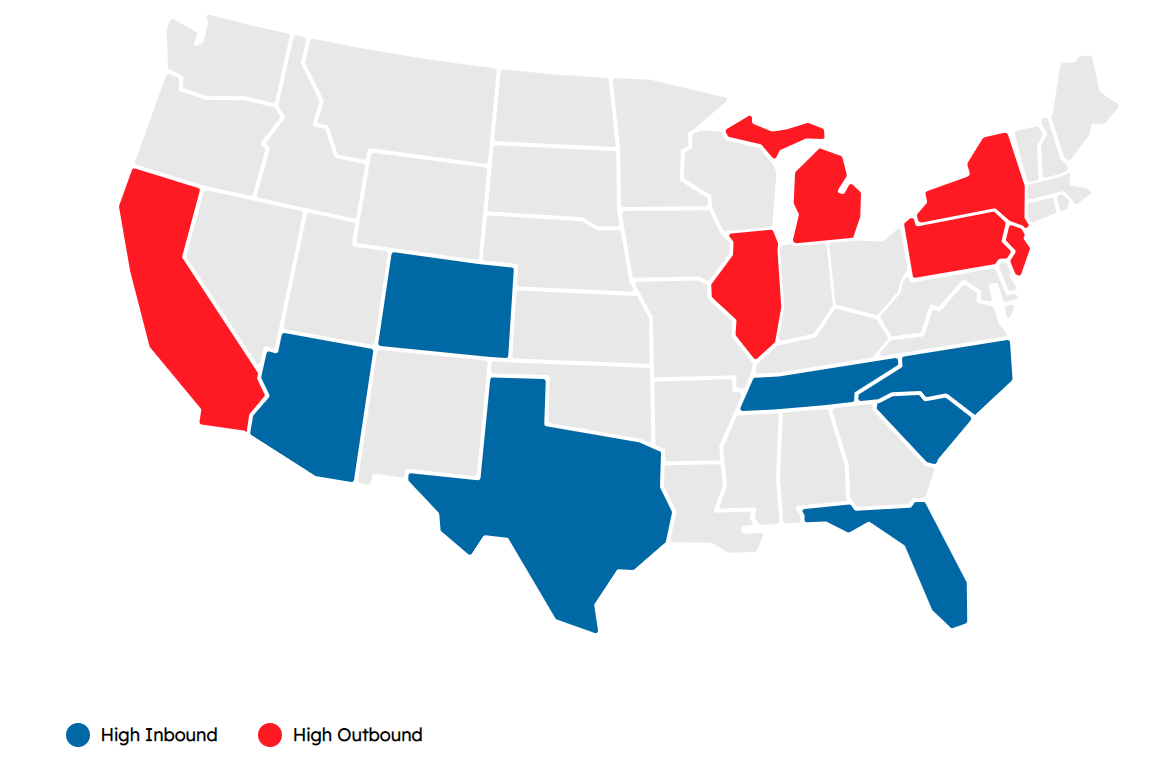 Among the top inbound states in the Moving Migration Report, some cities saw a higher influx of new residents than others. The top cities in 2022 include:

There are more cities that were high on the list outside of the top states, including some in Minnesota, Ohio, and Texas. Among the similarities between them, the low cost of living and reasonable housing prices is at the top. In addition, all offer access to year-round outdoor recreational opportunities and activities, or in other words an enhanced quality of life.

Top inbound states uncovered within the map include South Carolina (66%), North Carolina (64%), Tennessee (64%), Arizona (57%), and Florida (56%). Top outbound states include Illinois (65%), California (62%), New Jersey (61%), and Michigan, Pennsylvania, and New York (59% tie). Considering Neighbor released information stating that 78% of Americans are reducing their spending this holiday season, coupled with the surge in inflation, states like California and New York have standards-of-living many Americans can no longer afford.

"Across the board, a clear trend of Americans leaving expensive, highly taxed, and cold states for warmer states with lower tax burdens can be observed, at both the state and city level," said Ryan Cox, Director of Consumer Channel at North American Van Lines. "It's a continuation of what we saw in 2021 and 2020. We're interested to see if these trends continue throughout 2023."

Overall, the number of moves in 2022 was less than 2021 and 2020. For the fourth year in a row, Illinois had the most significant percentage of outbound moves, while Tennessee, South Carolina, and North Carolina maintained their spots at the top of the inbound state list since 2020.