Home >> Daily Dose >> Where, Oh Where did all the Refinancers go?

Where, Oh Where did all the Refinancers go?

Mortgage lenders stand to gain more business from 30-year mortgage holders who qualify and could benefit from refinancing, but the refinancing population is shrinking at a rapid rate.

So where are all the eligible refinancers?

Black Knight Financial Services’ Data and Analytics division reported in their latest Mortgage Monitor Report that as of November 2015, approximately 5.2 million borrowers could likely both qualify for and benefit from refinancing at today’s interest rates.

Although the number of refinancers may appear to be large, it is actually down from over 7 million in April 2015. Black Knight reports that interest rates were under 3.7 percent during this time, and the 20-year rate was 3.96.

Black Knight Data & Analytics SVP Ben Graboske explained, “This population is diminishing, and as mortgage interest rates rise, it will only continue to shrink further.” 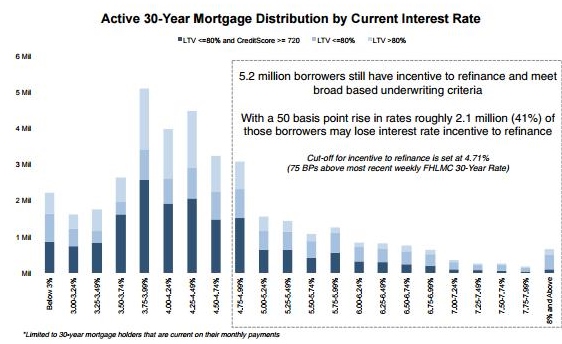 “If rates go up 50 basis points from where they are now, 2.1 million [41 percent] borrowers will fall out of the running; a 100-basis-point increase would eliminate another million, leaving only 2 million potential refinance candidates, the lowest population of refinance candidates in recent history,” Graboske noted.

Black Knight found that about 2.4 million could stand to save about $200 or more on their monthly mortgage payments after refinancing in today’s interest rate environment.

Graboske adds that since we currently live among “a very rate-sensitive population,” and if rates were to rise 50 basis points 1.4 million borrowers or 42 percent would miss those savings.

The report showed that 1 million potential refinance candidates would likely only save less than $100 by refinancing, but Black Knight says that a savings is still a saving and “may still have significant impact to some borrowers’ budgets.”

In addition, the data found that 1.9 million borrowers, the largest share of borrowers could be saving $100 to $200 every month on their mortgage payment.

All in all, the 5.2 million potential 30-year refinancers could be saving a total of about $1.2 billion on their monthly mortgage payment.

The states that will provide potential refinancers with the most savings include: Hawaii, District of Columbia, California, New York, Massachusetts, New Jersey, Maryland, Connecticut, Rhode Island, and Virginia.