Buyers are beginning to show their increasing demand for housing by purchasing more homes since the end of the financial crisis, but inventory remains an issue.

U.S. Census Bureau and the HUD reported Wednesday that sales of new single-family houses rose 10.8 percent from November 2015 to December 2015 to an estimated seasonally adjusted annual rate of 544,000. In November, the revised rate of new home sales was 491,000.

"This reflects a slow but steady increase in demand from homebuyers as well as increasing confidence of homebuilders," said Ralph B. McLaughlin, Chief Economist at Trulia. "It also a positive sign for the U.S. economy headed into 2016, as new home sales leads to new construction and consumer demand for housing-related goods and services." 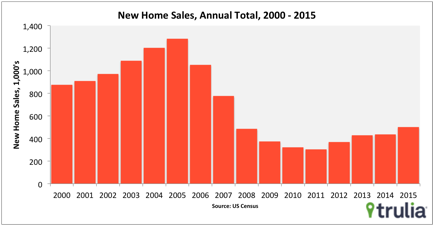 McLaughlin noted that despite the positive movement in this sector of the housing market, new home sales remain 41 percent off the 1990 to 2006 normal.

On the down side of the report, homebuyers had fewer homes to choose from as inventory declined from 5.6 months in November 2015 to 5.2 months at the current sales rate in December 2015. McLaughlin says this "means inventory will be tighter for homebuyers headed into the 2016 buying season."

Only 19 percent of new-home sales were under $200,000 in 2015, a decrease from 23 percent in 2014, the report found. "This is likely due to a combination of low inventory of new starter homes and fewer first-time homebuyers," McLaughlin stated.

The Western and Southern region led much of the year-over-year increase in new home sales in December 2015, with rises of 20.5 percent and 17.6 percent, respectively. "This is especially good news for homebuyers along the costly West Coast who have faced low inventory and sharp price increases over the past three years," McLaughlin said.

Realtor.com Chief Economist Jonathan Smoke noted, "The data affirms that the fall season and end of 2015 was stronger than previously reported, which is a clear sign that the new home market is finally seeing growth as builders expand offerings and offer more affordable price points. However, the headline gains should be taken with caution because the underlying survey data for December were thin."

He continued, "Neither of the monthly or year-over-year sales observations was statistically significant. In other words, although it is positive and likely correct that the new home market is gaining momentum, the underlying data suggest that we’re seeing no clear trajectory up or down in December, which is not typically a big month for new home sales."