Pending home sales moved up very little in December 2015, coming in much less than projected by industry experts. According to the National Association of Realtors' (NAR) Pending Home Sales Index, pending home sales rose only 0.1 percent to 106.8 in December, marking the 16th month of consecutive increases.

The index, which tracks contract signings, found that pending home sales stood at 106.7 in November 2015 and is up 4.2 percent year-over-year in December from last year's total of 102.5.

"Warmer than average weather and more favorable inventory conditions compared to other parts of the country encouraged more households in the Northeast to make the decision to buy last month," said Lawrence Yun, NAR Chief Economist. "Overall, while sustained job creation is spurring more activity compared to a year ago, the ability to find available homes in affordable price ranges is difficult for buyers in many job creating areas. With homebuilding still grossly inadequate, steady price appreciation and tight supply conditions aren't going away any time soon." 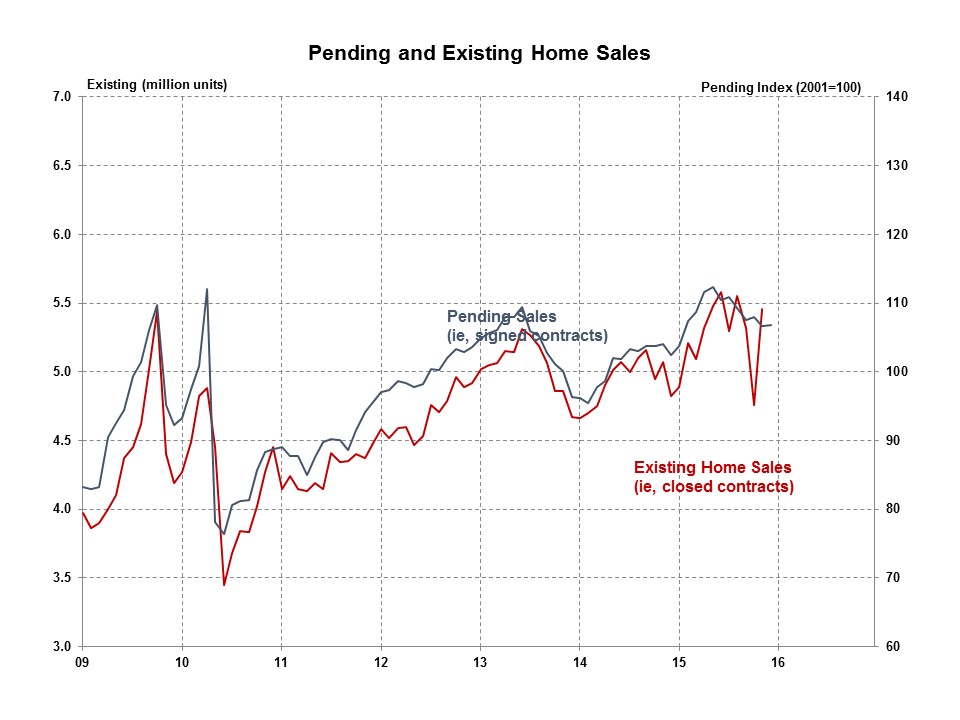 Was the TILA-RESPA Integrated Disclosure (TRID) rule a factor in the small rise in pending home sales for December?

The NAR expects existing-homes sales to rise about 1.5 percent to 5.34 million in 2016, while the national median existing-home price for all of this year is expected to increase between 4 and 5 percent.

Southern pending home sales fell 0.5 percent to an index of 119.3 in December, but are 1.0 percent above last year, while sales in the West decreased 2.1 percent in December to 97.5, but are 3.4 percent above a year ago.

Yun said that demand may see some slowdown in the near future—even though the positive employment situation may tempt more households to buy—due to the tumultuous start of the year in stocks and the energy sector.

"The silver lining from the market turmoil in recent weeks is the fact that mortgage rates have slightly declined," Yun stated. "Buyers looking to close on a home before the spring buying season begins may be rewarded with a mortgage rate at or below 4 percent."

Previous: Has Homeownership Finally Found its Balance?
Next: The Path to Paperless Mortgages