Many industry experts and economists believe that U.S. housing markets are in the midst of an affordability crisis that will only get worse over time, but what if today's rising home prices were not as high as many believe?

Although home prices have been on the rise for the last few years, Black Knight Financial Services' December 2015 Mortgage Monitor found that homes are much more affordable than the were prior to the housing crisis, despite 43 consecutive months of annual home price appreciation. 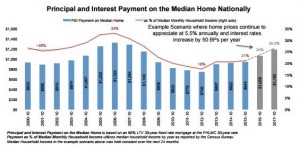 The company said that at today's rate of home price appreciation and a 50 BPS/year increase in interest rates, affordability could finally near the pre-bubble average. If this occurred, the average payment on the median home will rise $114 nationally and would require 24 percent of median monthly income (still under the 2000-2002 average).

Black Knight reported that interest rates have a larger effect on affordability than home prices. A 1 percent increase in rates is equal to a 13 percent rise in home prices. "Although rates rise similarly across states, rising rates may have varying impacts on home affordability around the country," the report noted.

Black Knight determined that eight states would be less affordable than 2000 to 2002 levels in one year and 22 states in two years.

Previous: Are Buy-to-Rent Investment Strategies Viable?
Next: The Week Ahead: A Very Important Employment Situation