Stock market and Treasury yield volatility continued this week and so did the downward trend of mortgage rates, which opened up more opportunities for refinancing.

Freddie Mac's Primary Mortgage Market Survey [1](PMMS) showed that mortgage rates deceased "amid ongoing market volatility" and troubled Treasury yields. The report showed that the 30-year fixed mortgage rate is at its lowest point since April 30, 2015 when it averaged 3.68 percent. 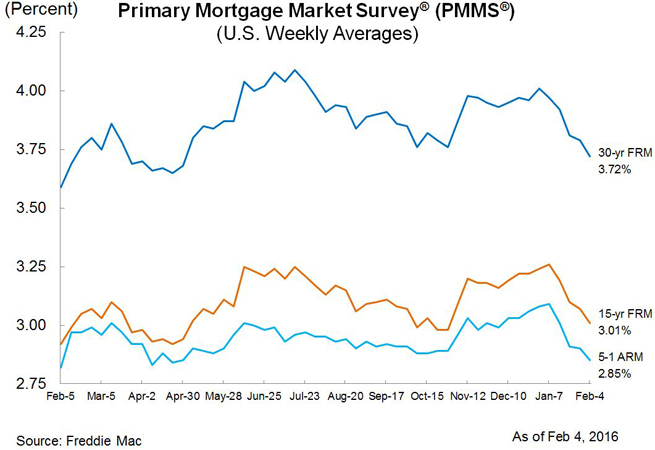 "Market volatility—and the associated flight to quality—continued unabated this week," said Sean Becketti, Chief Economist, Freddie Mac. "The yield on the 10-year Treasury dropped another 15 basis points, and the 30-year mortgage rate fell 7 basis points as well, to 3.72 percent. Both the Treasury yield and the mortgage rate now are in the neighborhood of early-2015 lows."

The five-year Treasury-indexed hybrid adjustable-rate mortgage (ARM) averaged 2.85 percent this week with an average 0.4 point, down from last week when it averaged 2.90 percent, the report noted. A year ago, the 5-year ARM averaged 2.82 percent.

"These declines are not what the market anticipated when the Fed raised the Federal funds rate in December," Becketti explained. "For now, though, sub-4-percent mortgage rates are providing a longer-than-expected opportunity for mortgage borrowers to refinance."

Although mortgage interest rates continue remain at historical lows, potential buyers and refinancers are steering clear of the housing market.

For the week ending January 29, 2016, mortgage applications decreased 2.6 percent from one week earlier, according to the Mortgage Bankers Association's Weekly Mortgage Applications Survey.

Matthew Pointon, Property Economist at Capital Economics noted that the low interest rates "might seem counterintuitive given that the Fed hiked interest rates in December. But the flight to safety triggered by the turmoil in the oil and equity markets has pushed down Treasury yields and therefore mortgage rates."

"And although we think rates will increase this year, a strong labor market and easing in lending standards will ensure applications for home purchase see further gains," he said.