Though homebuilding hiring has increased, the number of unfilled jobs in the overall construction sector is growing and homebuilders can't seem to shake one particular worry looking ahead in 2016.

According to the Bureau of Labor Statistics Job Openings and Labor Turnover Survey (JOLTS) and National Association of Home Builders (NAHB) analysis, open construction sector jobs rose to 207,000 in December from 138,000 in November.

"Rising job openings for the overall economy are affecting many business sectors as the unemployment rate has fallen, with employers wanting new workers but holding greater numbers of unfilled positions," the NAHB noted. "This could bode well for future hiring, but it might also signal that scarcity for labor is becoming a more general concern."

But with fewer construction employees, the NAHB said that builders indicated are concerned about cost/availability of labor in the housing market in 2015 and heading further into 2016, among others: 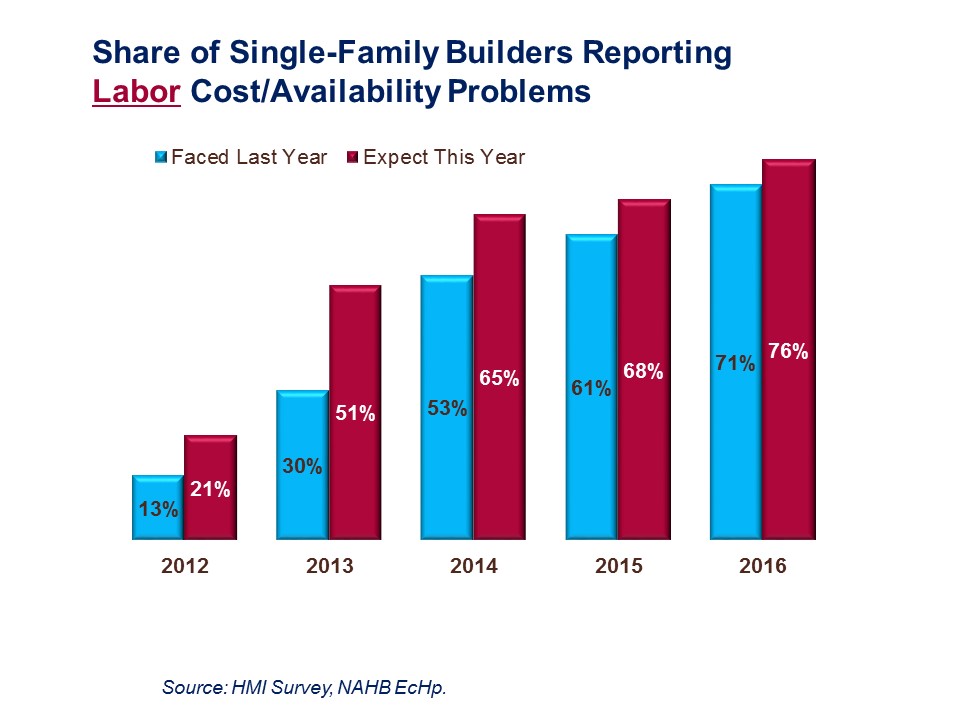 Confidence among home builders dipped down slightly in December, but builders remain optimistic about the housing market.

For the second consecutive month, builder confidence in the market for newly constructed single-family homes decreased, this time one point to 61 in December, the National Association of Home Builders (NAHB) reported in their Wells Fargo Housing Market Index (HMI).

“For the past seven months, builder confidence levels have averaged in the low 60s, which is in line with a gradual, consistent recovery,” said David Crowe, NAHB Chief Economist. “With job creation, economic growth and growing household formations, we anticipate the housing market to continue to pick up traction as we head into 2016.”

“Overall, builders are optimistic about the housing market, although they are reporting concerns with the high price of lots and labor,” said NAHB Chairman Tom Woods, a home builder from Blue Springs, Missouri.