How a Decline in Labor Will Raise Home Prices

Immigration has stalled in the U.S. for several years now, and if this trend continues, home builders will be burdened with higher construction labor costs.

Zillow's Home Price Expectations Survey showed that more than half (61.7 percent) of experts say that if immigration numbers do not improve, labor costs will increase.

She added, "The supply of homes for sale isn't keeping up with demand–especially among entry-level homes that first-time buyers want. New-home construction has been sluggish, and homes that are getting built are aimed at a higher-end clientele. If builders hire relatively more expensive U.S.-born workers, they may continue to focus on the more profitable higher end of the market."

Data from the Pew Hispanic center founds that the number of immigrants in the U.S. who entered the country illegally has remained flat for more than five years. In addition, the undocumented Mexican immigrant population in the U.S. is now 20 percent smaller than it was in 2007.

The survey, sponsored by Zillow and conducted by Pulsenomics LLC, asked over 100 housing experts about their expectations for the housing market.About  43 percent said a decline in the undocumented immigrant population would result in more construction jobs for U.S.-born workers and other foreign-born workers, the survey found. Meanwhile, 40 percent said that higher labor costs would cause builders to focus on high-end construction, which has a higher profit margin. Over 30 percent of respondents tied immigration trends to the lack of inventory, and predicted that the number of new homes built will remain lower than historic norms. 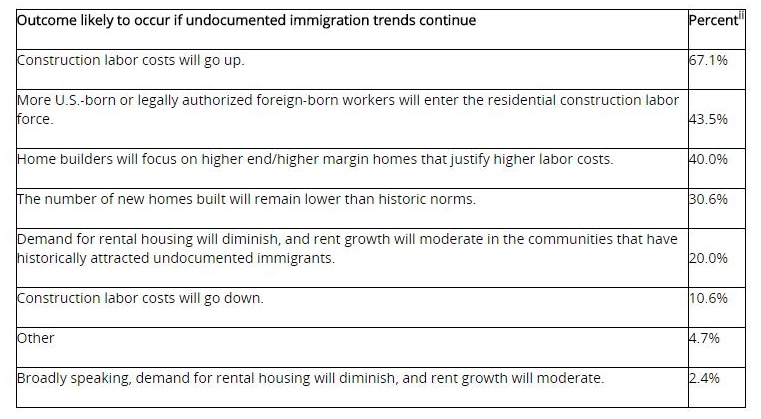 Over half of those surveyed noted that the decline in single-family construction over the last decade is due to high labor costs and a lack of skilled workers.

The report also found that prices for newly constructed homes in December 2015 were up 7 percent from pre-recession times when prices averaged $267,000.

"The outlook for 2016 home price appreciation is 3.7 percent, less than the 4 percent value increase realized in 2015," said Pulsenomics founder Terry Loebs, noting that longer-term expectations for home values continue to drift lower. "The five-year average annual rate of home value appreciation expected by the panelists is stuck at 3.3 percent, its lowest level since 2012. These subdued expectations are remarkable in light of the improvement in headline unemployment numbers, recent evidence of real income growth, stubbornly low home inventory levels, and very low mortgage rates that seem unlikely to spike anytime soon."