Home Price Slowdown a Reality in the Housing Market

While home prices are still rising due to buyer demand and low inventories, supported by low mortgage rates, eased lending standards, and improving job markets, they are doing so at a much slower pace.

“While home prices continue to rise, the pace is slowing a bit,” said David M. Blitzer, Managing Director and Chairman of the Index Committee at S&P Dow Jones Indices. 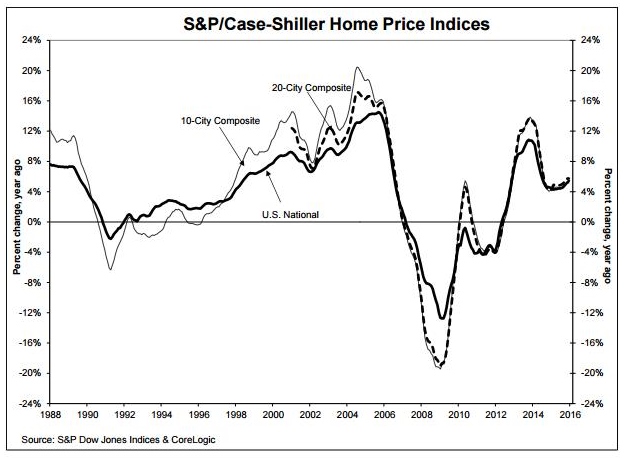 According to the HPI report, the 10-City Composite rose 5.1 percent in the year to December 2015 compared to 5.2 percent the prior month. Meanwhile, the 20-City Composite’s year-over-year gain was 5.7 percent, the same as November.

Matthew Pointon, Property Economist at Capital Economics noted, "House price gains continue to be driven by a gradual rise in housing demand coming up against very low levels of homes for sale. Demand is being supported by falling mortgage interest rates, a steady easing in mortgage lending standards and an improving jobs markets. That helped mortgage applications for home purchase reach their highest level in almost six years in January."

The highest year-over-year gains among the 20 cities were once again recorded in Portland, San Francisco, and Denver with increases of 11.4 percent, 10.3 percent, and 10.2 percent, respectively.

“Sparked by the stock market’s turmoil since the beginning of the year, some are concerned that the current economic expansion is aging quite rapidly. The recovery is six years old, but recoveries do not typically die of old age," Blitzer stated. "Housing construction, like much of the economy, got off to a slow start in 2009-2010 and is only now beginning to show some serious strength. Continued increases in prices of existing homes, as shown in the
S&P/Case-Shiiller Home Price Indices, should encourage further activity in new construction. Total housing starts
have stayed above an annual rate of one million starts per year since last March and single family home have been
higher than 700,000 units at annual rates since June. Housing investment continues its positive contribution to
GDP growth.”

Previous: The Mortgage Collective Expands Offerings to Include Solutions Group
Next: Kansas City Fed: Rate Hike Should be “On the Table” March