“Instability in financial markets did not seem to put much of a drag on home prices in the fourth quarter,” said Andrew Leventis, FHFA Supervisory Economist. The 1.4 percent rise in home prices "was in line with the extremely steady—but historically elevated— appreciation rates we have been observing for several years now." 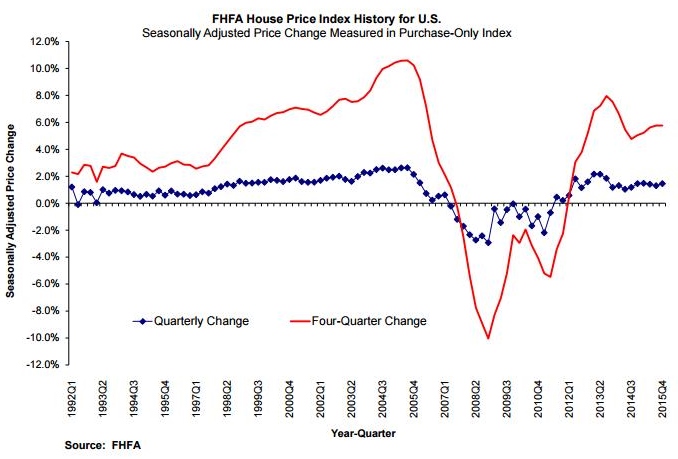 Out of the 100 most populated metro areas in the U.S., four-quarter price increases were greatest in the San Francisco-Redwood City-South San Francisco, California Metropolitan Statistical Areas District, where prices increased by 20.7 percent. On the other hand, home prices came in weak in New Haven-Milford, Connecticut, falling 1.5 percent.

The Pacific division experienced the strongest increase in the fourth quarter of the nine census divisions, with a 2.1 percent quarterly gain and an 8.0 percent year-over-year increase. Meanwhile, home price appreciation was weakest in the Middle Atlantic division, where prices rose 0.6 percent from the last quarter.

While home prices are still rising due to buyer demand and low inventories, supported by low mortgage rates, eased lending standards, and improving job markets, they are doing so at a much slower pace.

Matthew Pointon, Property Economist at Capital Economics noted, "House price gains continue to be driven by a gradual rise in housing demand coming up against very low levels of homes for sale. Demand is being supported by falling mortgage interest rates, a steady easing in mortgage lending standards and an improving jobs markets. That helped mortgage applications for home purchase reach their highest level in almost six years in January."