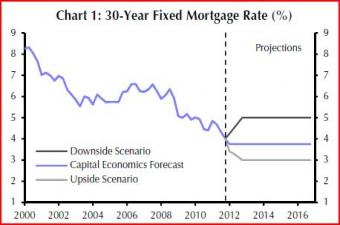 A steady pace for home prices and sales signal that a housing recovery may finally be under way, but a disorderly default by any of the euro zone states overseas could choke affordability with a spike in mortgage rates, ""Capital Economics"":http://www.capitaleconomics.com/ analysts said Tuesday.

""The healing of the housing market will be a long and gradual process, but it does at least appear to be underway,"" the two wrote.

The economists offered a series of forecasts that sketch slow-but-steady increases for new and existing-home sales, while housing starts fall and home prices stabilize.

Dales and Diggle said that fourth-quarter home sales could rise 5.2 percent year-over-year in 2012, up from 4.8 percent this quarter, before flattening next year to hit 5.3 percent.

Existing-home sales would ascend 4.8 percent in the fourth quarter this year and likewise slow to a crawl over 2013 to settle at 4.9 percent in annual increases by yearend, according to their forecasts.

Taken together, single-family and multifamily housing starts would slump to 16.9 percent in the fourth quarter, down from 22 percent in the first this year, and fall further to 12.7 percent by yearend in 2013.

But the economists wrote that defaults on sovereign debt by any state in the European Union would tip the still-recovering U.S. economy, crimping exports, discouraging lenders, and leading to a slide in home prices.

Graphs from the report suggest a stark contrast for interest rates for mortgage loans, with a successful resolution of the crisis for debt-saddled nations like Greece and Spain leaving mortgage rates near 3 percent and a disorderly default by either spiking rates to 5 percent.

And lenders are already heeding signs of a sovereign default, according to the economists, who reference a Senior Loan Officer survey from the Federal Reserve in January that fielded tighter lending standards.

Home prices would fall by another 5 percent in the instance of a credit crunch in Europe.

""The sovereign debt crisis in the euro-zone is by far the biggest risk to our house price forecast,"" Dales and Diggle wrote. ""A disorderly break-up of the single currency would see US house prices take another lurch down.""

Investors will help determine if Greece defaults on sovereign debt obligations when they accept or refuse mass write-downs in mid-March.