Since reaching a low point in January, mortgage rates last month broke 3%. Is that enough to dampen homebuying enthusiasm and perhaps lead to replenishment of the dwindling inventory? Not so fast, say economists who study housing data.

For one thing, the rise in mortgage rates over the next couple of months is likely to be more muted in comparison to the last few weeks, reported Fannie Mae.

Researchers at Redfin conducted a survey, just before rates hit 3% (2.97%) in an effort to determine how slowly rising rates might impact the pace of home-purchasing sentiment nationwide. According to Redfin data journalist Dana Anderson, Redfin analysts know that growth in the number of homes that have gone under contract has started to slow in recent weeks, but, Anderson reports, "it’s too early to tell whether the trend is a result of winter storms, a shortage of homes for sale, or rising mortgage rates or whether the trend is likely to continue into spring or not."

“If the $1.9 trillion economic stimulus package that’s set to provide cash relief to Americans and get people back to work is successful, interest rates are likely to inch back up to pre-pandemic levels of about 3.5%. That would alter the dynamics of the housing market, though it wouldn’t necessarily put a damper on it,” said Redfin Chief Economist Daryl Fairweather. “The financial relief coming to families earning less than $150,000 will give more of them the desire and means to buy a home. That will result in more demand for affordable homes. That’s different from what we’re seeing now, which is a housing market driven by wealthy people purchasing relatively expensive homes. Higher mortgage rates will also make buyers more price conscious and less likely to bid 10% or more over asking, so we could see some of the intense competition slow down.”

Forty-four percent of those who responded to Redfin's survey said mortgage rates rising above 3.5% would have no impact on their homebuying plans, while 10% would cancel their plans to buy a home.

“The small increase in mortgage rates has had zero impact on buyers so far,” said Seattle Redfin agent Ben Stanfield. “Rates are still historically low and they’re still keeping buyers in the market. Even though rates are creeping up, they’re not increasing nearly as quickly as home prices. If you can buy, it’s a good idea to buy now before homes become even more expensive.”

Here's a glimpse at said survey: 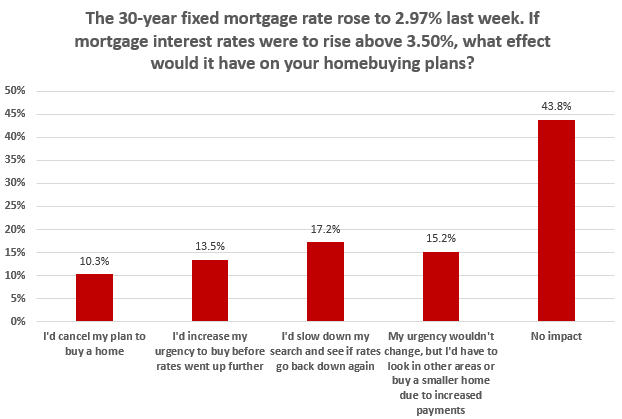 Read it in full at Redfin.com.