Home >> Daily Dose >> The Week Ahead: A Tough Road for Home Sales

The Week Ahead: A Tough Road for Home Sales

Last month, new single-family home sales failed to impress, dropping nearly 10 percent, while existing-home sales saw little movement. Many in the industry are a bit skeptical of a turnaround this month due to a lack of inventory.

Ralph B. McLaughlin, Chief Economist at Trulia noted, "New home sales in January start off weak, but the 12-month rolling total looks solid. The share of new homes purchased that haven't started construction sits near a 10-year high, likely reflecting a fall in inventory of existing homes. All new home sales numbers from the U.S. Census are extremely volatile: the margin of error is wide and often includes zero, which means we can't be certain whether the month-over-month or year-over-year changes actually increased, decreased, or stayed flat."

Supply and demand troubles have been constant burdens on the housing market's recovery, and Ten-X.com (formerly Auction.com) predicts that existing-home sales will be affected by the lack of options in the market. 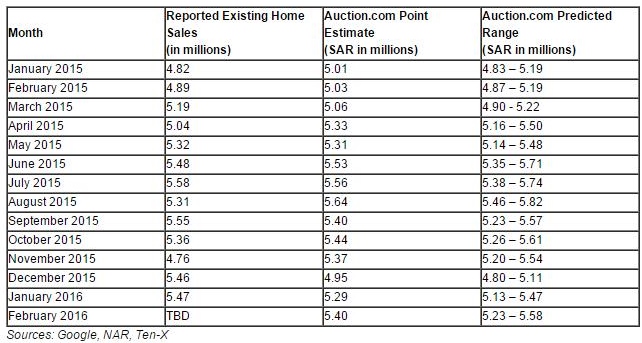 shows that existing-home sales for February 2016 are expected to fall  between 5.23 and 5.58 million annual sales, with a targeted number of 5.4 million. This number is up 10.4 percent year-over-year, but down 1.3 percent month-over-month.

"Following the temporary market setbacks brought on by the implementation of the CFPB’s ‘Know Before You Owe’ rules, the latest sales figures indicate that housing is starting off the year on solid ground,” said Ten-X Chief Economist Peter Muoio. “Several positive underlying fundamentals–particularly a stronger labor market and improved household spending power due to reduced energy expenses–should lead to a rise in home sales despite growing global economic concerns and relatively weak GDP growth.”