With the days of the recession well in the rearview, housing markets have experienced dramatic growth in home values, and some market values have surpassed previous all-time highs set during the housing bubble.

Zillow's February Real Estate Market Report found that homes are worth more than ever before in 26 percent in U.S. housing markets, which shows that these markets are close to a full recovery.

"These new records mean we're no longer making up ground lost during the housing recession—we're laying a new path forward, based on demand for housing and economic growth throughout the economy" said Zillow Chief Economist Dr. Svenja Gudell. "In some markets, these new highs are a return to normalcy. The fact that other markets are still off by double digits may not mean those markets are far from being recovered. It just highlights how extraordinarily inflated home values had been during the housing bubble." 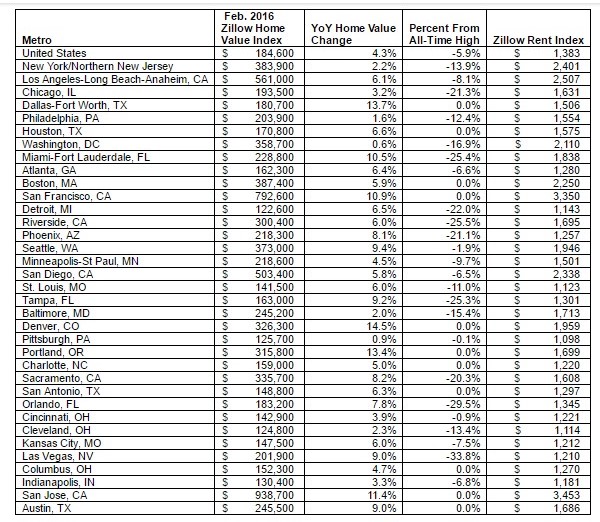 Southern housing markets, especially in Texas and Tennessee, completely outdid their previous median home value highs. Dallas set a new record at $180,700 in February, up 13.7 percent year-over-year, and Nashville home values increased 9.5 percent to a median of $189,100, the report showed.

Although home values and home prices are rising at a rapid pace but inventory remains low, making it "difficult to buy a home in many markets, especially for renters trying to save for a down payment amongst historically high rental costs," Zillow said. Rents are rising at 2.6 percent year-over-year and Zillow expects rent will continue to slow significantly over the next year.

Previous: The MReport Webcast: Friday 3/25/2016
Next: Economy Receives a Slight Boost—Or Does It?