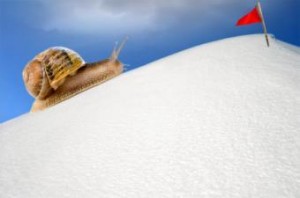 Recovery in the housing market is stumbling back to solid ground, thanks to a rise in home prices and existing home sales, as well as a drop in foreclosures, according to the latest Housing Barometer report released Wednesday by Trulia.

However, growth in these sectors is dragging disproportionally weaker growth in young adult employment and stagnation in the new home construction sector in its wake, and worsening conditions for borrowers and investors keeps the road to overall recovery bumpy.

Similarly encouraging is the fact that rising home prices and an improving economy are shrinking delinquency and foreclosure rates. According to Kolko, the delinquency/foreclosure rate was 63 percent back to normal in February, up from 42 percent one year earlier. More foreclosures are also being completed and sold, particularly in Florida, New York and New Jersey, where a judicial-foreclosure process can take years.

Holding up total recovery, however, is the steady-but-agonizingly-slow growth of employment among adults age 25 to 34, who are key to creating new households. Nearly 76 percent of these adults work, which is up not even one full percentage point from last year, Trulia reported.

Similar stagnation plagues the new construction sector, which Trulia found to be only 44 percent of the way to where it should be—a 1 percentage point drop from last year.

Further complicating recovery is a tri-level worsening of conditions for buyers and investors. First, though it remains cheaper to buy a home than to rent in the 100 largest metros, rising home prices mean declining affordability and, thus, a bigger challenge for first-time buyers.

Second, investors looking to flip or rent properties are stepping back as home prices rise, meaning fewer existing homes are being sold.

Third, potential buyers are leery of rising mortgage rates and the new rules that accompany them, and mortgage purchase applications and mortgage-based home sales are declining as a result.

Kolko, however, expects this last factor may be a temporary hurdle. "Rates remain low by historical standards, and the new mortgage rules offer longer-term clarity that should encourage banks to make more loans that are within the new rules," he said.

Overall, Kolko puts the keys to recovery in the hands of the young. "The boost to young-adult employment is especially important right now," he said. "The less the recovery can depend on the engine of investors, the more the housing market will need to rely on young adults entering the housing market, first as renters and eventually as buyers."