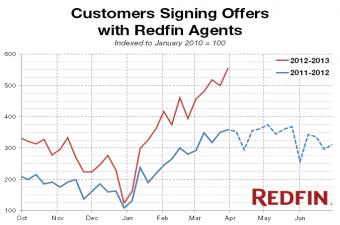 Redfin: Buyers Not Driven Off by Low Inventory

While inventory shortage has created myriad problems for buyers, they're apparently undeterred from their home searches, according to data from ""Redfin"":http://www.redfin.com/.

The brokerage's Real-Time Demand Pulse for April (which examines March data) shows strong monthly gains in the number of Redfin customers touring homes and in the number of signed offers being made, indicating potential pickups in April and May sales.

According to Redfin, the number of tour requests increased 9.1 percent from February to March, a notable increase from the 3.7 percent rise seen last year. In addition, the last week of March saw a 1.0 percent increase from the prior week compared to a 1.1 percent drop during the same time in 2012.

Meanwhile, the number of customers making signed offers gained 21.7 percent month-to-month, slightly better than a 21.0 percent gain a year ago. In the week ending March 30, signed offers rose a staggering 11.5 percent--more than five times the 2.2 percent growth recorded in 2012.

""Although finding new listings continues to be a problem for buyers in nearly every market, this ongoing struggle only seems to be strengthening the resolve of today's buyers,"" Ellis said.