Bank of America’s first-ever look at homebuying trends has found that more buyers want a home more than they want an investment in property.

According to BOA’s inaugural Homebuyer Insights Report (HIR), released Wednesday, three quarters of first-time homebuyers want to skip buying a starter home in favor of a long-term, single-family homes. That same 75 percent was also motivated by “emotional factors,” meaning more first-time buyers are seeing the purchase of property as homes, not investments and portfolio pieces.

However, about two-thirds of first-time buyers said they are also motivated by the financial advantages of owning a home, and 59 percent said they are aware enough of the importance of a downpayment that they are saving specifically for one. Nine of 10  homebuyers consider saving for or paying off a home as important as saving for retirement, the report found.

Millennials, however, did say they still expect some help getting that first home. According to the HIR, 66 percent of first-time millennial buyers said they expect some type of help, financial or otherwise, from their parents when buying. 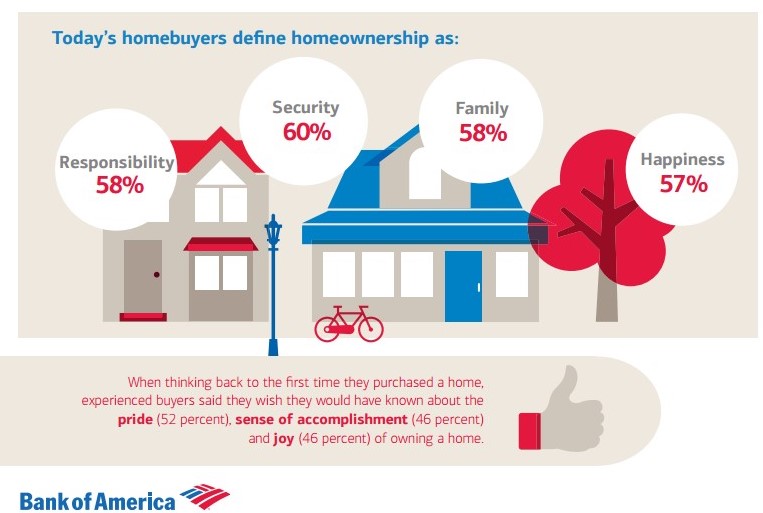 Also when it comes to money, good mortgage rates top the list of reasons first-time buyers want to work with a mortgage provider. However, the same percentage of buyers (59) said that trustworthiness was just as important, trumping the wish to work with providers who have buyers’ best interest at heart.

Perhaps more surprising is the growing interest in settling into the suburbs. Despite migration trends toward cities and urban-style downtowns, particularly among millennials, over the past few years, the HIR shows that nearly 60 percent of first-time buyers want out of the cities and into the suburbs. And for those buyers, the biggest motivators are cost (82 percent) and the wish to live in a good neighborhood (71 percent).

According to the HIR, three-quarters of first-time buyers said they want a single-family home, while 11 percent said they would like to purchase a townhome. A mere 6 percent are interested in condos.

“Every day, we talk to clients who are motivated to purchase a home for many reasons, including the pride of ownership and desire to establish roots in a community,” said D. Steve Boland, a consumer lending executive for Bank of America. “Today’s aspiring homebuyers want to be selective and believe they should wait until they can afford to buy a home they’ll live in for years to come. They’re also realistic about the need to save for a down payment.”