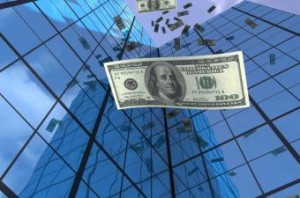 Citigroup profits outperformed analysts’ expectations for the first quarter, thanks to declines in expenses and net credit losses.

The bank reported Monday profits of $3.9 billion in Q1, just barely edging out last year’s income of $3.8 billion. Gains were more impressive when put next to Q4’s earnings, which disappointed at $2.5 billion.

The gain came despite a year-over-year drop in total revenues, which were down 1 percent to $20.1 billion as a result of declines in fixed income markets revenues and lower refinancing activity.

Commenting on the earnings report, Citi CEO Michael Corbat said, “Despite a quarter that was difficult for our company, we delivered strong results.”

Indeed, the bank did see its share of setbacks. In early April, Citi offered a $1.13 billion settlement to resolve claims on residential mortgage-backed securities, taking a charge of $100 million in its first-quarter results.

Only weeks before that, the Federal Reserve shocked the bank by denying its plans to repurchase stocks and increased dividends based on objections over its capital planning processes.

“Very cognizant of our shareholders desire to see a sustainable return of capital, we are engaged with the Fed to better understand their expectations regarding the CCAR [Comprehensive Capital Analysis and Review] process,” Corbat said, adding that Citi remains committed “to bringing our capital planning process to the highest possible standards.”

For all the difficulties the company faced, there were a few bright spots. According to the Q1 report, operating expenses came to $12.1 billion, 1 percent lower than the prior-year period, driven by efficiency savings and a decline in Citi Holdings assets (partly offset by higher regulatory costs and legal expenses).