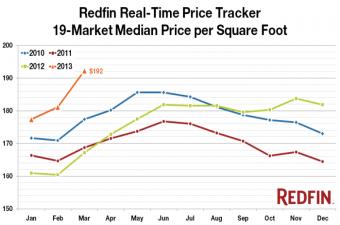 The seasonal surge in home sales combined with another drop in listings to further drive up prices in March, ""Redfin"":http://www.redfin.com/ observed in its latest Real-Time Price Tracker.

According to the brokerage, home sales rose 25 percent month-over-month in March, reflecting the normal spring spike that occurs every year. On a year-over-year basis, however, sales were up just 0.9 percent--the smallest gain in 14 months.

Ten of the 19 markets tracked by Redfin saw sales increase year-over-year, one fewer than February. All 19 markets posted month-over-month improvements.

Home prices also saw a nice boost, growing 6.2 percent from February and 15 percent from March 2012. Eighteen of the 19 markets measured reported monthly and yearly increases, with Long Island being the only exception.

However, the dark cloud that is low inventory continued to hang over the market. The number of homes for sale fell 31 percent from March 2012 to March 2013--actually a slight improvement over February's decline--and was flat month-over-month, driving up competition and limiting buyers' choices.

""You know that inventory is in sad shape when it feels like good news to have a month where the number of listings on the market stays flat,"" wrote Redfin analyst Tim Ellis on the company's ""blog"":http://blog.redfin.com/blog/2013/04/real-time-price-tracker-march-2013.html. ""That's exactly what happened in March, as the total number of homes for sale fell just 0.1 percent compared to February. The year-over-year decline was bad, but not as bad as it has been, with inventory dropping 'just' 30.6 percent from March 2012.""

Inventory has fallen year-over-year for 25 months in a row now, Ellis added.

Meanwhile, from March 1 through 26, 34.8 percent of new listings were under contract in two weeks or less, an increase of 1.6 percentage points over February--further proving that the market is firmly in the grasp of sellers at this point.

""With sale-to-list ratios exceeding 100 percent and buyers facing multiple offers on over three quarters of Redfin deals, the spring homebuying season is living up to our January prediction of being the most hectic in years,"" Ellis wrote.