Many reports of the nation's economic progress for the first quarter have been soft, and the advance estimate of real gross domestic product (GDP) growth for Q1 released Wednesday by the Bureau of Economic Analysis (BEA) is no exception.

The BEA reported in the first estimate for Q1 that real GDP grew at an annualized rate of just 0.2 percent during the quarter, only a fraction of the 2.8 percent that has been projected for the year. The real GDP grew at a rate of 2.2 percent in the fourth quarter of 2014 and 2.4 percent for the entire year.

Despite the report of economic growth nearly grinding to a halt in the first Q1 estimate, however, economists' outlook for growth for the remainder of the year, particularly in relation to housing, remained unchanged.

"As in recent years, the first quarter, once again, defied expectations and optimism for the year ahead. The advance estimate on GDP showed a paltry 0.2 percent annualized growth rate," Freddie Mac deputy chief economist Len Kiefer said. "The slowdown in growth was primarily driven by declining exports, with next exports shaving nearly 1.3 percentage points off of first quarter growth. And despite strong corporate balance sheets and low interest rates, nonresidential fixed investment as a share of total output remains well below historical averages."

The increase in real GDP in the first quarter primarily reflected positive contributions from personal consumption expenditures (PCE) and private inventory investment that were partly offset by negative contributions from exports, nonresidential fixed investment, and state and local government spending. Imports, which are a subtraction in the calculation of GDP, increased.

In spite of the recent reports of slow economic growth in Q1, Fannie Mae has maintained its forecast for GDP growth of 2.8 percent this year and its position that the economy will "drag housing upward." Fannie Mae chief economist and SVP Doug Duncan pointed out that the actuals as far as housing–existing home sales, new home sales, and prices–were either at or very close to their predicted levels during Q1, and mortgage purchase applications have been way up for the last couple of months.

"Today's GDP announcement doesn't change our view on housing," Duncan said. "Housing is right where we expected it to be."

While Duncan said the rate of real GDP growth announced Wednesday was "a lot weaker than anticipated," he said that "we don't think that it's going to be sustained. There are two more revisions."

Likewise, Kiefer was undeterred by Wednesday's GDP report in his forecast of economic growth for the remainder of the year.

"Looking ahead to the rest of the year, we maintain our positive outlook and expect a pick-up in growth," Kiefer said. "Even with a slow first quarter, economic growth should be solid enough for robust job gains and improving housing markets."

The BEA's second estimate for GDP growth in the first quarter, which will feature more complete data, will be released on May 29. Robert Denk, economist for the National Association of Home Builders, wrote on the NAHB's Eye on Housing blog that growth will accelerate once the data is more complete, although the outlook for the near term is not rosy.

"The BEA emphasizes that this 'advance' report is based on incomplete data in some sectors and sources that will be revised in others, so the revised estimates of first quarter growth scheduled for release in May and June could improve the picture, but based on this report the future may be significantly less sunny in the near term," Denk said. 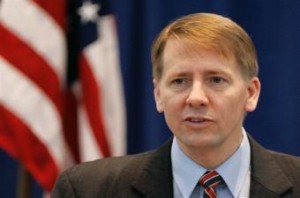 In a new white paper, the former Director of the Consumer Financial Protection Bureau outlined his proposal for preventing economic hardships.