The economic and financial well-being of American families paints a contradicting picture since the financial crisis.

The Federal Reserve Board's latest Report on the Economic Well-Being of U.S. Households that found that American families experienced continued mild improvement in their financial well-being in 2015, but many families were struggling financially and felt excluded from economic advancement.

The Fed found that 75 percent of all adults are mostly or completely satisfied with the overall quality of their neighborhood, but only 35 percent of those in very high-poverty census tracts report this level of satisfaction.

A total of 51 percent of homeowners believe that their home value increased in the 12 months prior to the survey, while 43 percent expect that home values in their neighborhood will increase in the next 12 months, the report said. 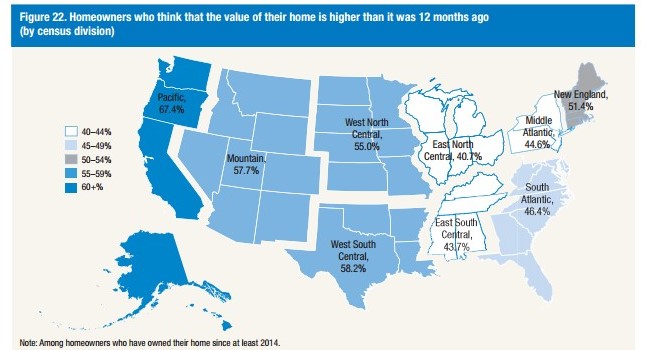 She continued, "It's important to identify the reasons why so many families face continued financial struggles and to find ways to help them overcome them."

On the banking and credit front, the Fed reported that a majority of individuals believe that credit is available to them should they apply for it, but a sizeable minority of those who recently expressed a desire for credit report some difficulty in getting approved. Only 8 percent of those surveyed indicated that they applied for a mortgage loan in the last year, the same percentage tried to refinance their home in the previous year. Fourteen percent received at least one denial or offer of less credit for a mortgage, and 22 percent got the same response for their refinance.

The report found that 75 percent of respondents are somewhat or very confident in their ability to obtain a credit card were they to apply for one. Forty-six percent of adults desired additional credit in the prior year, and 40 percent of those who desired credit say that they faced a real or perceived difficulty in accessing credit.

In the event of a financial disruption, the Fed found that 46 percent of adults say they either could not cover an emergency expense costing $400, or would cover it by selling something or borrowing money.

"There is little question that, on the whole, the financial well-being of Americans seems to have improved relative to the prior year and relative to the year before that. However, the many pockets of consumers who display elevated levels of financial stress and who are at risk for financial disruption in the case of further economic hardships remain a concern," the report said. "While the three years of data from the SHED cannot determine whether these elevated risks for some consumers are a residual impact from the Great Recession, or reflect the typical state of their finances, the results highlight the need to continue to monitor these populations and track the extent to which they are, or are not, fully benefitting from broader economic growth."