Home >> Daily Dose >> Are Homebuyers Happier After Moving to a New Metro?

Are Homebuyers Happier After Moving to a New Metro?

We know that a large number of homeowners—often motivated by the newfound freedom of remote work or the desire for spaciousness—relocated during the COVID-19 pandemic. But how are those movers faring now, as the world reopens? The majority, eight out of every 10 according to a just-released Redfin report, seem satisfied with the decision to make a new metropolitan area home and are reporting improvements to their financial situations.

Agents say they are seeing the evidence.

“I recently worked with a couple that listed their home in Los Angeles and moved to Ohio because the wife was able to work remotely,” said Los Angeles Redfin agent Lindsay Katz. “The house sold for more than $1 million and they bought a nice home in Ohio for around $400,000. The husband had been a teacher in Los Angeles, but now he’s able to stay home and raise the kids because they’re saving so much money. Their mortgage is half of what it was, taxes are lower, even food costs less. Remote work allowed them to re-evaluate their living situation and their finances.”

And the numbers support the anecdotes. In the first two weeks of April, Redfin surveyed about 500 Refin.com users who moved to a different metro area from March 2020 through March 2021:

Redfin researchers point out that "there has been a fair amount of speculation about the psychology of pandemic homebuyers, with some wondering whether homebuyers will regret making such a major life decision in the midst of a once-in-a-lifetime global crisis."

Team Redfin added that rocketing house prices and intense competition have led some homebuyers to do things they wouldn’t do in a typical year, such as waive inspection and appraisal contingencies and buy homes sight unseen in an area they don’t yet live in.

Although 15% of respondents said they had some regrets about moving, the survey showed a large majority standing by their choices. 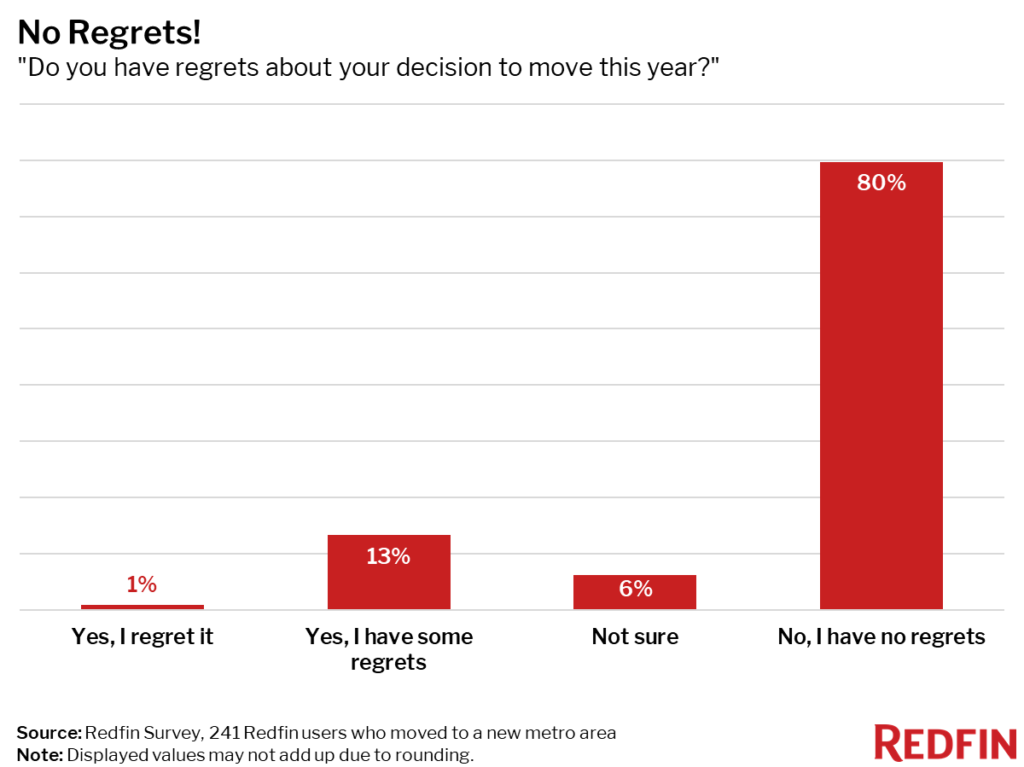 “For most people, relocating to a different metro area probably wasn’t a knee-jerk reaction to the pandemic,” said Redfin lead economist Taylor Marr. “A lot of Americans had already been considering relocating, but they were blocked from actually making the move because they had to stay close to their office or wanted to live near friends or their child’s school. The pandemic and resulting work-from-home culture have removed some of those barriers, allowing many people to choose where they live based on factors like affordability, proximity to family, and weather. And the loosening of social ties that come with remote work, remote schooling, and a lack of in-person events made it somewhat easier for families to leave their comfort zone and try somewhere new. Those people are likely to be satisfied with their moves because the circumstances of the pandemic have allowed them to chase their dreams.”

View the results in their entirety at Redfin.com.