This week, mortgage rates trended up while applications declined as the Federal Reserve sent out large signals that a rate hike is imminent in June, but Friday's employment report could completely derail those plans.

According to the report, the 30-year fixed-rate mortgage (FRM) averaged 3.66 percent with an average 0.5 point for the week ending June 2, 2016. This rate is up from last week when it averaged 3.64 percent but down from year ago at this time when the 30-year FRM averaged 3.87 percent.

Sean Becketti, Chief Economist at Freddie Mac said, "Since jumping 11 basis points on May 18th, the 10-year Treasury yield has leveled-off around 1.85 percent. Mortgage rates continue to adjust to this new level with the 30-year fixed rate inching up another 2 basis points this week to 3.66 percent. Recent statements by the Fed appear to have persuaded the market that a rate hike may come sooner than later. However, the market is fickle, and Friday's employment report has the potential to swing opinion 180 degrees in the other direction." 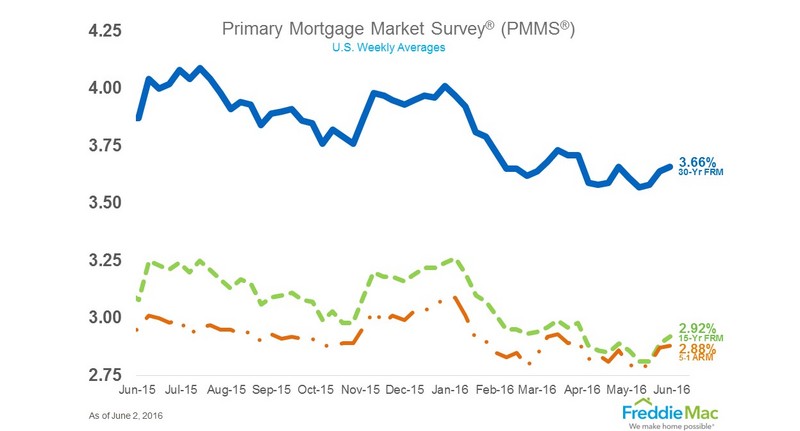 As mortgage rates moved up, buyers fled from the market as mortgage applications decreased 4.1 percent for the week ending May 27, 2016, according to the Mortgage Bankers Association's (MBA) Weekly Mortgage Applications Survey.

Jonathan Smoke, Chief Economist of Realtor.com said, "Given weaker economic growth in the first quarter and lingering global economic concerns, the Federal Reserve already seemed unlikely to push aggressive increases in short-term rates this year. After last Friday’s report on April’s weaker level of job creation, the odds of the Fed raising rates in June diminished even further. The direction for rates for the rest of the summer and into the future remains murky. I’ve surveyed a range of recent forecasts from the Mortgage Bankers Association, Freddie Mac, Fannie Mae, and highly respected macro economists, and I found quite a bit of divergence."

It may be sooner; Fed officials have dropped strong hints that a June rate hike is forthcoming. Fed governor Jerome Powell, a voting member of FOMC, said in a public address recently that he believes the economy is on “solid footing" and that the economy could be ready for the Fed to raise the federal funds target rate “fairly soon.” After June, the next FOMC meeting will be July 26-27.

"Participants agreed that their ongoing assessments of the data and other incoming information, as well as the implications for the outlook, would determine the timing and pace of future adjustments to the stance of monetary policy," the minutes from the FOMC meeting said. "Most participants judged that if incoming data were consistent with economic growth picking up in the second quarter, labor market conditions continuing to strengthen, and inflation making progress toward the Committee’s 2 percent objective, then it likely would be appropriate for the Committee to increase the target range for the federal funds rate in June."