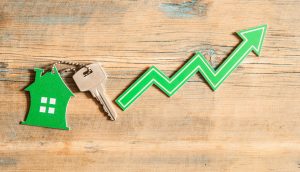 For the second consecutive week, mortgage application volume is on the rise, as the Mortgage Bankers Association (MBA) reported app volume rising 4.2% week-over-week for the week ending June 17, 2022.

As mortgage rates took a dramatic turn upward last week, as expected, the refi market as expected continues to tumble, as the MBA’s Refinance Index fell 3% from the previous week, and was 77% lower than the same week one year ago.

As the refinance share of mortgage activity decreased to 29.7% of total applications from 31.7% the previous week, the rapid rise in rates is once again igniting the adjustable-rate mortgage (ARM) share of activity, as ARMs rose to 10.6% of total mortgage applications.

“Purchase applications increased for the second straight week–driven mainly by conventional applications–and the ARM share of applications jumped back to over 10%,” said Joel Kan, MBA’s Associate VP of Economic and Industry Forecasting. “However, purchase activity was still 10% lower than a year ago, as inventory shortages and higher mortgage rates are dampening demand. The average loan size, at just over $420,000, is well below its $460,000 peak earlier this year, and is potentially a sign that home price-growth is moderating.”

“Mortgage rates continued to surge last week, with the 30-year fixed mortgage rate jumping 33 basis points to 5.98%–the highest since November 2008, and the largest single-week increase since 2009,” added Kan. “All other loan types also increased by at least 20-basis points, influenced by the Federal Reserve’s 75-basis-point rate hike and commentary that more are coming to slow inflation. Mortgage rates are now almost double what they were a year ago, leading to a 77% drop in refinance volume over the past 12 months.”

As noted by Kan, the Federal Reserve’s move to curb inflation last week by increasing the nominal interest rate 75-basis points, marking the largest rate hike seen since the Nov. 15, 1994 meeting of the Federal Open Market Committee (FOMC) was expected to send a ripple across the housing market.

As Kan stated, the average loan size—at slightly over $420,000—is approximately $40,000 below its peak of $460,000 earlier this year, a potential sign that home price-growth is moderating. The trend in price drops is symbolic of the slowdown in the housing market. Many buyers are backing off amid skyrocketing home prices, surging mortgage rates, high inflation, and a faltering stock market.

According to a new report from Redfin, home price drops have become increasingly common throughout the U.S., particularly in parts of Utah and other mid-sized metros in the West. Approximately half of the metros polled by Redfin saw more than 25% of home sellers drop their asking price in May. More than 10% of home sellers dropped their price in all 108 metros, driving the national share of price drops to a record high.

“There are two kinds of sellers in today’s market: Those who already know the market has cooled, and those who are learning about the cooling market as they go through the selling process,” noted Redfin Chief Economist Daryl Fairweather. “The former wants to sell quickly before the market slows further and they’re willing to price slightly below comparable homes in their neighborhood right away, and the latter may have to drop their price if their home doesn’t attract buyers within a few weeks. As more sellers come to terms with the slowing market, fewer homes will have price drops.”