According to a new data from RentCafe, a large influx of newcomers seeking warm weather and looser restrictions during the pandemic, alongside a wave of remote workers, has turned Florida into the most sought-after region by renters in 2022.

Miami-Dade County is now the hottest rental market in the nation, as the demand for apartments in Southern Florida is stronger than ever, putting apartment seekers in a tight spot to find a new place to call home due to high occupancy, low supply, and record-high lease renewal rates.

To rank the hottest rental markets, RentCafe analyzed the 100 largest markets in the U.S. where data was available, analyzing five revealing metrics when it comes to competitivity: 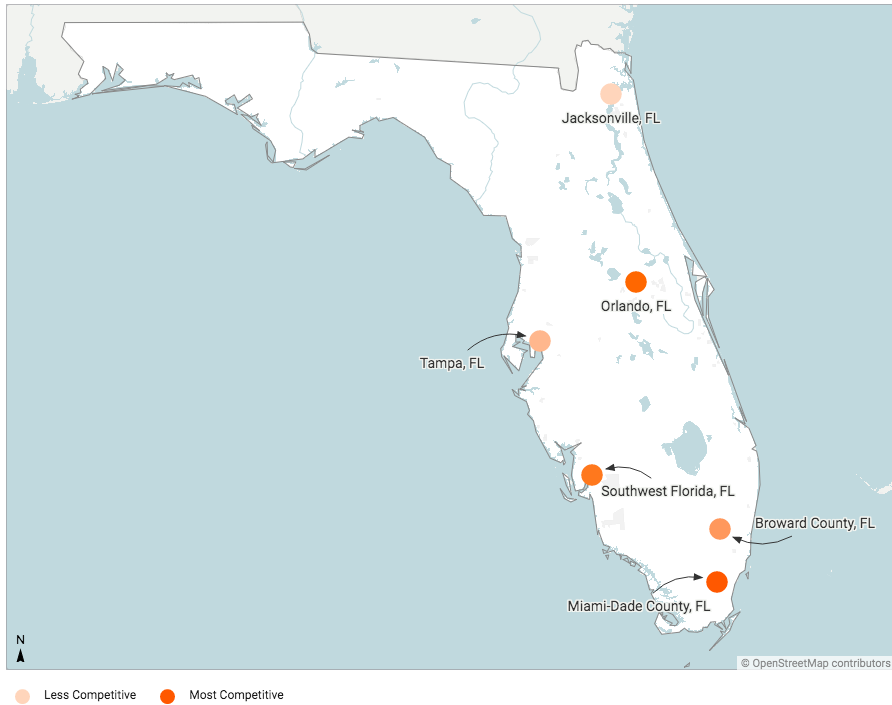 New data found that South and Central Florida are the most in-demand markets, alongside certain small and mid-sized markets in the Northeastern region. While some renters are moving from one area to another —while pushing demand— others are choosing to stay put rather than go through the ordeal of hunting for an apartment, which makes the competition for the existing stock of vacant apartments even more fierce.

On a national level, U.S. apartments that became vacant were filled within 35 days on average in the first part of 2022, with 14 renters competing for one apartment to secure a lease. More so, 95.5% of rentals were occupied during the same time period, especially as almost two-thirds of renters opted to renew their leases rather than move into a new apartment or become homeowners. In addition to the number of newly opened apartments accounting for just 0.7% of the total housing supply, finding a new rental is becoming more difficult.

Florida remains the nation's most competitive region when it comes to renting, with three metros occupying the top five spots in RentCafe’s ranking.

As the migration trend toward Florida was popularized during and after the pandemic, Miami-Dade County emerged as the hottest renter hub at the start of the 2022 rental season. South Florida’s appeal to renters from New York and other places relies heavily on the growing number of tech and finance businesses.

In addition, more and more house hunters are starting to feel the strain of surging inflation and mortgage rates. As a result, they are delaying or completely giving up on their dream to become homeowners, which puts even more pressure on the apartment market. Additionally, those choosing to settle here from outside of the Miami-Dade area are facing a double challenge: an overheating for-sale housing market and an ultra-competitive rental landscape.

According to Yardi Matrix data, the number of apartments in Miami-Dade County grew by 1.8% between January and April. That’s the highest growth in new rentals among the top 20 cities in our ranking — but still not enough to accommodate the soaring demand in the Magic City, especially since three-quarters of the apartment dwellers decided to renew their leases during the first four months of the year. With almost all apartments occupied, a whopping 31 renters competed for a vacant unit, and it only took 27 days on average for a rental to be occupied. 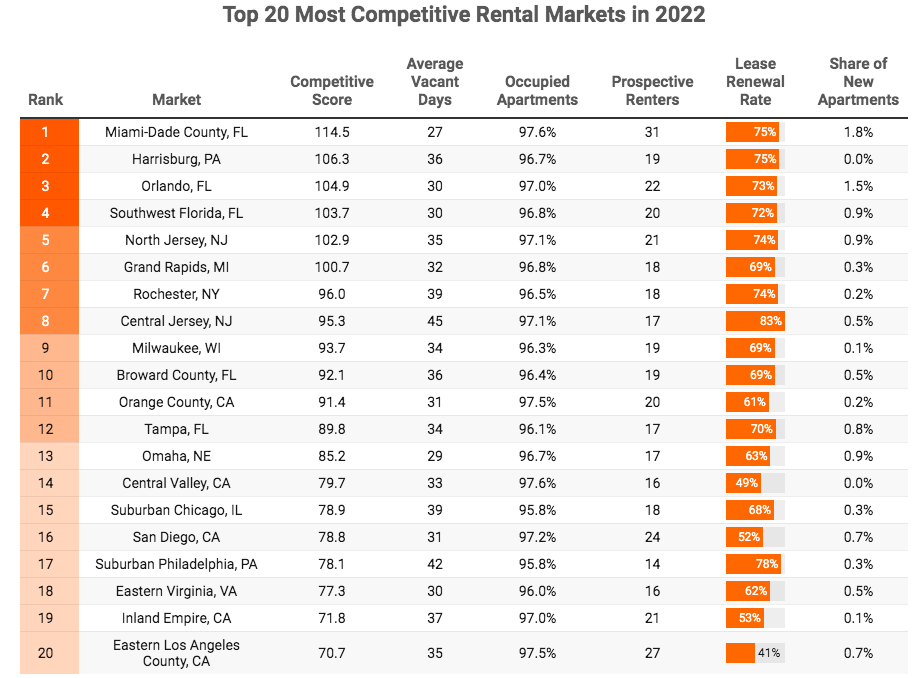 Orlando apartments are also in high demand with renters, claiming the third place in the ranking, and is far from meeting the growing demand for housing, despite an increase of 1.5% in the total number of apartments compared to the end of 2021. As a result, only a quarter of the renters decided to move into a new apartment. With 3% of the rentals available, it took an average of 30 days for an apartment to be filled, with as many as 22 renters competing to secure a lease for that place.

Southwest Florida is the fourth most competitive rental market in the U.S. This corner of Florida is home to many welcoming cities, including Fort Myers, Sarasota, Cape Coral, Bradenton, Port Charlotte and Venice, all of which are great renting spots for people of all ages. Many of these locations have seen some of the highest shares of inbound migration in the past year, according to the latest Census population estimates.

With very few apartments opened between January and April, Southwest Florida is still not ready to accommodate this influx of renters. To make things even more challenging for apartment seekers, 72% of Southwest Florida renters stayed put in the first part of the year. The average vacant unit in the area was filled in just 30 days, and no less than 20 renters competed for an apartment in the Southwestern region.

To read the full report, including more details, charts, and methodology, click here.