The likelihood of home price declines across the United States in general over the next two years remained unchanged from last quarter, but a few markets could be looking at significant odds of price drops, according to the Summer 2016 Housing and Mortgage Market Review by Arch Mortgage Insurance (MI) Company.

Nationally, Arch MI put the risk of price declines at 5 percent, which is where it was in Q1. But some areas in the energy-extraction states (coal, oil, and natural gas) remained at heightened risk and may experience slower than normal economic and home price growth.

According to the report, North Dakota has a 52 percent chance of a price decline of any magnitude over the next two years. Arch MI attributed this primarily to a 3.9 percent drop in year-over-year total employment, which is the largest employment decline in the U.S. North Dakota’s home prices are also estimated to be overvalued by 21 percent, relative to historic norms, the report stated.

Wyoming’s outlook didn’t fare much better, with that state facing a 46 percent chance of declines through 2018. This is in part due to the fact that Wyoming’s mining and energy-related jobs “continue to contract faster than can be offset by growth in other sectors, such as tourism,” Arch MI reported. “Additionally, the number of homes listed for sale in Wyoming is now 20 percent higher than a year ago.”

West Virginia held at a 35 percent risk, unchanged due to the state’s swath of layoffs in the coal mining industry and a 1.5 percent state-wide drop in employment from one year ago.

However, these examples are not typical of what Arch expects over the next two years.

“Apart from some weakness in some energy-extraction states, home prices should rise faster than inflation over the next few years due to strong fundamentals,” said Arch MI economist Ralph DeFranco. “Positive fundamentals include strong affordability, healthy job growth (2.7 million net new jobs over the past 12 months, but the pace slowed recently) and net household formations outpacing new supply.” 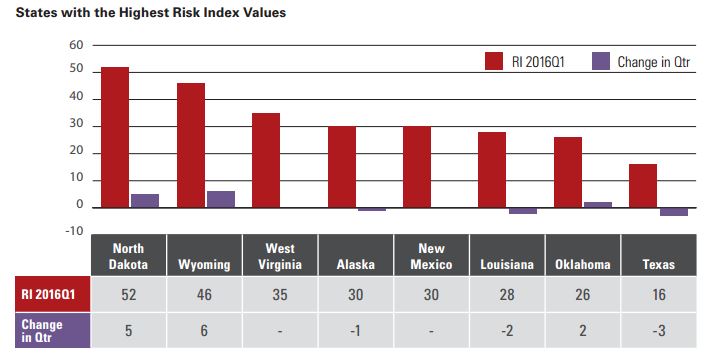