Fixed-rate mortgages are dropping in the wake of the U.K.’s Brexit vote, with 30-year FRMs hitting a three-year low this week. Thirty-year rates are, in fact, only 17 basis points higher than the all-time low of 3.31 percent, hit in November of 2012.

Freddie Mac’s latest weekly Primary Mortgage Market Survey set average 30-year fixed-rate mortgage at 3.48 percent for the week ending June 30. Last week, that average was 3.56 percent, and a year ago it was 4.08 percent.  Likewise, 15-year  fixed-rate mortgages averaged 2.78 percent, down from last week’s 2.83 percent and down 3.24 percent from last year.

“The immediate impact of Brexit on the mortgage market is the major decline in rates which produces lower monthly payments,” Realtor.com Chief Economist Jonathan Smoke said. “This means that a well-qualified buyer can afford an 8 percent higher price since the beginning of the year. The increase in buying power is more than offsetting the higher prices.”

Even 5-year Treasury-indexed hybrid adjustable-rate mortgages are down. They averaged 2.70 percent this week, compared to last week’s  2.74 percent and last year’s  2.99.

Sean Becketti, chief economist, Freddie Mac, said that in the wake of the U.K.’s decision to leave the European Union, the yield on the 10-year U.S. Treasury bond plummeted 24 basis points.

“This week's survey rate is the lowest since May 2013 and only 17 basis points above the all-time low,” Becketti said. “This extremely low mortgage rate should support solid home sales and refinancing volume this summer.” 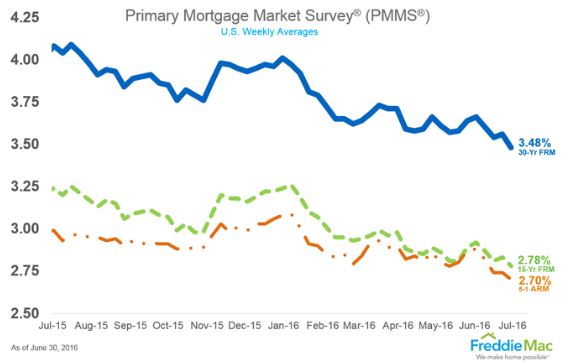 Previous: Existing-Home Sales Up, Albeit Slowly
Next: Five Star to Honor Achievements of Women in Housing