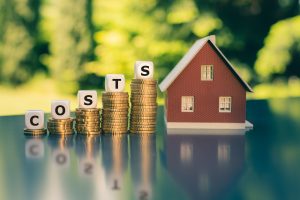 The COVID-19 pandemic did not just cause a global health crisis; not only did it throw the economy in a tizzy but it made certain markets behave in ways people have not seen before and could not anticipate. But housing, one of the pillars of the American Economy, saw cost burdens worsen during the first year of the pandemic in 2020, according to a new analysis by Alexander Hermann and Whitney Airgood-Obrycki from the Joint Center for Housing Studies at Harvard University (JCHS).

All-in-all, according to the study, the share of households that spent more than the standard 30% of their income on housing increased to 30% in 2020, a 1.5 percentage point increase from 2019 and was also the first substantial increase since 2010.

Renters bore the worst of changes, with their cost burdens rising 2.6 percentage points to 46% of all renters who are paying more than 30% of their monthly income.

This study was made possible through the release of U.S. Census Bureau data by way of the annual American Community Surveys. While surveys for 2019 and 2020 were hampered by Coronavirus restrictions and low participation, the Bureau has released experimental weights for those two surveys by incorporating administrative and third-party data (for the first time in survey history).

“Rising cost burdens in 2020 reversed a nearly decade-long trend of gradually improving affordability. Indeed,” the JCHS said. “The cost-burden rate peaked in 2010 in the aftermath of the housing crisis and Great Recession of the mid-2000s but has inched down every year since—excepting a slight uptick in 2018—declining 7.0 percentage points by 2019 when using the standard weights.”

“But if estimates using the experimental weights accurately capture the changes in the first year of the pandemic, the jump in cost burdens in 2020 entirely reversed the 1.4 percentage point decline in 2019 and reversed one-fifth of the improvement in the cost-burden rate over the past decade. To put this in context, in the aftermath of the Great Recession, total cost burden shares rose just 1.8 percentage point in 2008–2010.”

“The first year of the pandemic marked a significant financial shock for many households who were temporarily unemployed, cut back hours when childcare was disrupted, or missed shifts when they became ill,” the JCHS concluded. “Despite increased unemployment insurance and federal stimulus checks, many households lost income in the face of continually rising housing costs. Whether the economic recovery since 2020 has been enough to offset rapidly rising home prices and rents remains to be seen, but the pre-pandemic affordability crisis assuredly continues.”

Click here to see a full copy of the JCHS’s findings.