Low mortgage rates may be enticing new homebuyers, but Zillow reported Monday that not everyone is able to easily keep up with their payments.

Zillow’s latest monthly analysis report found that mortgage payments are least affordable for low-income earners, who can expect to spend more than 30 percent of their paycheck on house payments and nearly 23 percent of their income on a mortgage payment in a third of large U.S. markets. By comparison, middle and high income earners can expect to pay 15 to 11 percent on mortgages, respectively.

“Lower earners carry a heavier burden when it comes to making monthly payments,” the report stated. “Their incomes have been largely stagnant, while low-priced homes are gaining value fastest.”

For perspective, there are pre-crash numbers to consider. In 2007, low-income earners could expect to spend nearly 40 percent of their income on housing. By contrast, high earners barely broke 20 percent when they hit their peak expenditure ratios in 2006.

History aside, the burden on lower earners in some states is exceeding. Low-income earners in most large California markets, for example, are effectively priced out of buying a home. 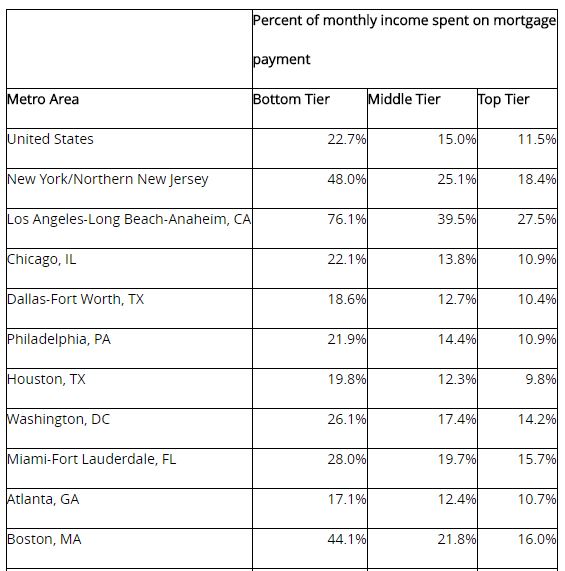 Los Angeles is particularly taxing on low-income earners. Homeowners there can expect to pay three-quarters of their income on mortgage payments, the report found. San Jose and San Francisco were hardly friendlier to low earners, who could be paying about 70 percent of their income on mortgages. By contrast, high-income earners in these markets are paying in the still-hefty 30 percent area.

"Housing affordability is a different story for low-income Americans than for median and high-earning people," said Zillow chief economist Svenja Gudell. "They are spending much more of their income on housing, even when they buy the least expensive homes. On top of that, we know that the least expensive homes are gaining value the fastest and are the most scarce, making it hard to find a home to buy even if you can afford one.”

“From a high level view, mortgage affordability looks pretty good across most of the country,” Gudell said. “But it's not good for everyone."