Home >> Daily Dose >> Is There a Link Between Inflation and Migration?

Is There a Link Between Inflation and Migration? 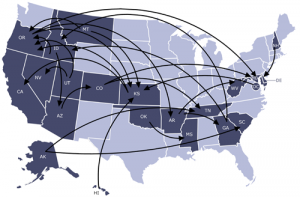 Popular migration hotspots such as Phoenix, Atlanta, Tampa, and Miami are also at the top of the list for inflation, a persistent force nationwide, as the prices of goods and services hit a four-decade high in June, according to a new report form Redfin.

In the second quarter of 2022, Phoenix, Atlanta, Tampa, Florida, and Miami all experienced double-digit inflation and were concurrently also at the top of Redfin’s users list of places people wanted to relocate to.

On the other side of the coin, prices of goods and services are rising much slower in the metro areas homebuyers are leaving, which were also found to have lower interest rates than their popular counterparts.

San Francisco, formerly one of the most popular destinations in the country, topped the list of cities Redfin users are looking to leave and also had the lowest inflation recorded in the survey at 5.6%. New York had the second-lowest inflation rate (5.9%) and it’s number three on the list of places homebuyers are leaving. Los Angeles (8%), Washington, D.C. (7.1%) and Seattle (8.9%), which round out the top five metros homebuyers are leaving, all have inflation rates near the middle of the pack. 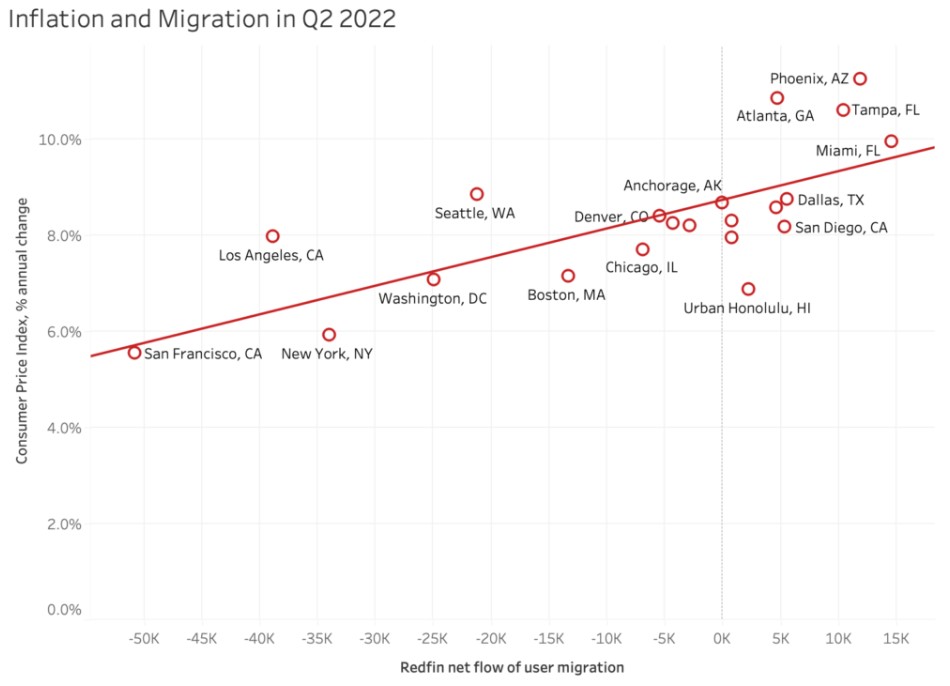 “A place’s popularity has a big impact on how much its local prices go up,” said Taylor Marr, Redfin Deputy Chief Economist. “An influx of people moving into a place like Phoenix or Tampa pushes up demand for everything from housing to food to fuel, which pushes up prices in all those areas and ultimately contributes to overall inflation. That means it’s getting more difficult for locals to afford daily expenses, especially when you consider that wages aren’t rising as quickly. In Phoenix, for instance, wages are up about 6% from a year ago but inflation is up more than 11% and asking rents are up 24%. Homeowners are in a better position than renters because they benefit from rising home values.”

The report further found that housing costs are a bigger inflation driver in popular migration destinations.

“On the other end of the spectrum, housing costs increased 3.8% in San Francisco, a small inflation driver compared with food, medical care, and other goods and services, in addition to transportation,” the study continued. “The story is similar in New York, where housing costs rose 4.2%, also a smaller increase than most of the other categories.

Redfin concluded their report by saying that the share of homebuyers relocating is at a record high, largely because remote work has become so prevalent. Many homebuyers have moved from high-cost costal areas to cheaper areas inland, especially in the Sun Belt, where popularity has rendered several of those areas as less affordable than before, they are still rank relatively well as a place to get the most for your dollar.