Existing-home sales increased for the fourth consecutive month, sparked by the highest share of first-time buyers in four years, according to the June 2016 existing-home sales report from the National Association of Realtors (NAR) released Thursday.

Existing-home sales for June were up from May by 1.1 percent to an annual rate of 5.57 million (May’s downwardly revised rate was 5.51 million). June’s existing-home sales rate was an increase of 3 percent over-the-year (5.41 million in June 2015) and was still the highest rate in more than nine years (5.79 million in February 2007).

The first-time buyer share in June was 33 percent, an increase of 3 percentage points from May and the highest rate since July 2012, according to NAR. First-time buyers have represented an average of 31 percent of all buyers for the first half of 2016 compared to 30 percent for all of 2015.

“The modest bump in June sales to first-time buyers can be attributed to mortgage rates near all-time lows and perhaps a hopeful indication that more affordable, lower-priced homes are beginning to make their way onto the market,” NAR Chief Economist Lawrence Yun said. “The odds of closing on a home are definitely higher right now for first-time buyers living in metro areas with tamer price growth and greater entry-level supply—particularly areas in the Midwest and parts of the South.”

“Though June’s existing home sales numbers show that we’re about 95 percent back to the pre-recession average, there are many more households in the U.S. looking for homes than in the early 2000s,” Trulia Chief Economist Ralph McLaughlin said. “As such, a lack of supply continues to hold back homebuyers. The month’s supply of existing homes in June 2016 was the lowest since June 2005. Homebuyers are finding little relief as the housing market recovery marches on. A silver lining from tight inventory is that homes are selling faster, which benefits agents and sellers. Existing home sales per agent ticked up to the highest level since June 2015.” 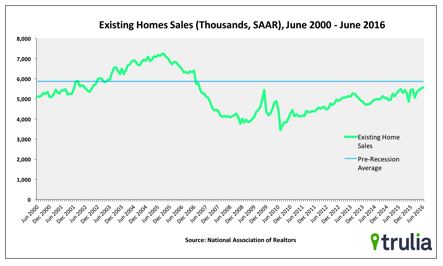 Inventory issues notwithstanding, Yun said the first half of 2016 has been solid as far as homebuying.

“Existing sales rose again last month as more traditional buyers and fewer investors were able to close on a home despite many competitive areas with unrelenting supply and demand imbalances,” he said. “Sustained job growth as well as this year's descent in mortgage rates is undoubtedly driving the appetite for home purchases.”

Jonathan Smoke, Chief Economist with realtor.com, added, “The housing data we have so far this year should already ensure that 2016 ends as the best year of home sales in a decade, despite 46 straight months of tight housing supply. When there is limited supply, home values have strong support, but potential buyers face challenges finding a home for sale to meet their needs. We appear to be hitting the ceiling for how quickly houses can sell and thus how much sales can grow given such limited supply, but the strong demand and tight supply are continuing to produce above-average price gains.”

Yun’s assessment came with a caveat, however.

“Looking ahead, it's unclear if this current sales pace can further accelerate as record high stock prices, near-record low mortgage rates and solid job gains face off against a dearth of homes available for sale and lofty home prices that keep advancing,” Yun said.