According to Zillow’s Real Estate Market Reports for June 2016, the number of available homes for sale is 5 percent less than what it was in June 2015 and 38 percent less than its peak in 2011. The National Association of Realtors (NAR) reported earlier this week that the total number of existing homes for sale in June was 2.12 million, down from 2.25 million a year ago.

The low inventory presents fewer options to homebuyers and therefore has created a competitive market in which buyers are moving even more quickly to close on homes, according to Zillow. In June, the average home closed after being on the market for an average of 78 days, which is a week faster than the average time it took a home to close in June 2015. The largest declines occurred in Eastern markets such as Pittsburgh, Philadelphia, and Charlotte, North Carolina, all of which saw the average time on the market for a home fall by two weeks.

Since that number includes the time it takes to close, typically one to two months after the house goes under contract, that means homes are pending within about a month of being listed, Zillow reported. 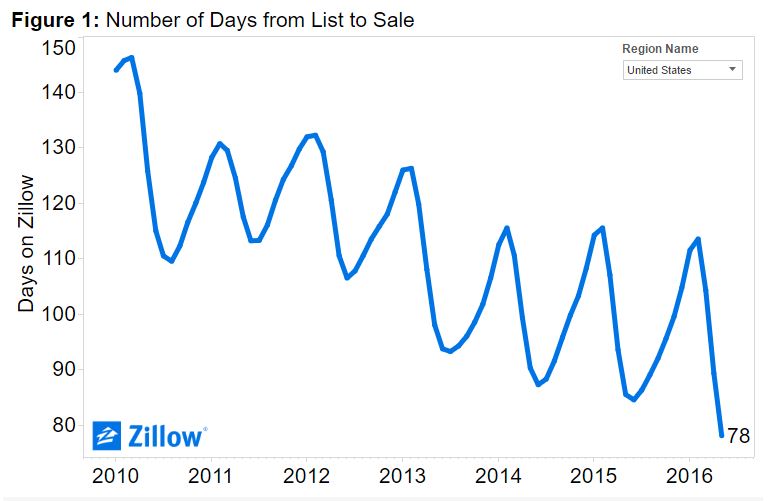 The average time a home stays on the market has been steadily declining since 2010, when it was about five months.

“When there are so few homes on the market in the first place, it makes sense that those that are available would be scooped up more quickly,” Zillow Chief Economist Dr. Svenja Gudell said. “But in addition to the speed of the market being a product of limited inventory, that speed may also be contributing to that scarcity of inventory too. Potential sellers might love the attention their home will get once listed—and the chance for a windfall profit if a bidding war breaks out over it. But many of those sellers also have to turn around and become buyers. They may end up in a bidding war of their own once they try to buy in this environment, if they can even find a suitable home to begin with. Instead, it’s likely that many current homeowners who don’t have to sell are choosing to stay put rather than enter the fray—which in turn only contributes to tighter inventory.”

One effect the tight inventory is having on the housing market is an increase in home values. In June, the average home in the U.S. was worth $187,000, which was up year-over-year by 5.4 percent; according to Zillow, home values have been rising by 5 percent or more year-over-year for eight months in a row.

On the other hand, rents, which had been steadily rising, are now growing at their slowest pace in almost two years. According to Zillow, the average rent in June was $1,409.