Home prices across the U.S. climbed for the 49th straight month in May, though the rate of acceleration eased for the fourth consecutive month, according to the latest S&P CoreLogic Case Shiller U.S. National Home Price NSA Index.

Year over year, the report found that in 10 cities, home prices gained 5 percent in May (the same as the prior month), and 4.4 percent over May 2015. This was, however, down from the 4.7 increase over May 2015 the previous month. The 20-City Composite reported a year-over-year gain of 5.2 percent, which was down from April’s 5.4 percent year-over-year increase. 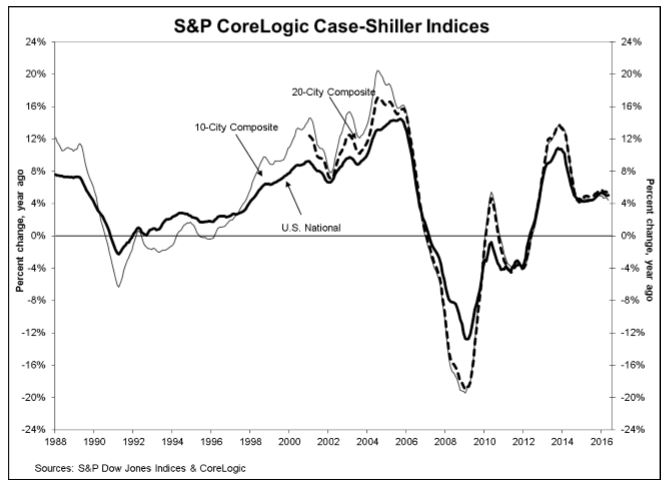 “Over the last year, the Pacific Northwest has been quite strong while prices in the previously strong spots of San Diego, San Francisco, and Los Angeles saw more modest increases,” he said. The two hottest areas during the housing boom were Florida and the Southwest. Miami and Tampa have recovered in the last few months while Las Vegas and Phoenix remain weak. When home prices began to recover, New York and Washington saw steady price growth; now both are among the weakest areas in the country.”

McLaughlin also pointed out, however, that May was the fourth straight month in which the year-over-year increases were smaller than the previous month.

“This is a sign that the U.S. housing market may be cooling In the wake of double-digit price appreciation between 2012 and 2014,” he said. “While the S&P/Case-Shiller National Home Price Index is an important metric to watch, it’s worth noting that the measure is more reflective of price movements in premium homes rather than middle or lower-tier homes.”

Previous: It Looks at Lot Like 2008 for New Home Sales
Next: Political Discussions Around Homeownership Heat Up