For the first time in 2015, pending home sales declined in June, slowing momentum in the height of the homebuying summer season. According to the National Association of Realtors' (NAR) Pending Home Sales Index (PHSI), pending home sales dropped in June after five consecutive months of increases, but remained close to May's level, which was the highest in nine years.

This is a tricky time of year to assess housing trends as the housing market is very seasonal," said Jonathan Smoke, chief economist at Realtor.com. "The seasonal trend varies by market so a general interpretation of these numbers should be treated with skepticism. Regardless of what reading you prefer, the level of sales remains high."

The index found that pending home sales fell 1.8 percent to 110.3 in June but is still 8.2 percent above the June 2014 level of 101.9. Although the index decreased last month, it is still the third highest reading this year and has increased year-over-year for ten consecutive months.

Although pending sales decreased in June, the overall trend in recent months supports a solid pace of home sales this summer, according to Lawrence Yun, NAR chief economist.

"Competition for existing houses on the market remained stiff last month, as low inventories in many markets reduced choices and pushed prices above some buyers' comfort level," Yun said. "The demand is there for more sales, but the determining factor will be whether or not some of these buyers decide to hold off even longer until supply improves and price growth slows."

"Affordability is going to be the decisive factor in the housing market’s continued recovery," Hepp said. "Since pending sales are homes that are in escrow (e.g., have a signed contract) and will likely close in 1 to 2 months, it suggests that existing home sales through the summer will post solid year-over-year gains. However, we starting to see a slowdown which may be because home prices are pushing up against the affordability ceiling especially in faster moving markets where inventory is tight."

Stephen Melman, J.D., director of economic services at the National Association of Home Builders (NAHB) said that the June data is merely a slight obstacle and should not alter future housing market expectations.

"The earlier string of positive pending sales releases in 2015 was consistent with a strong report last week as existing sales reached a pre-recession level," Melman said. "The June PHSI is a small bump in the road, and follows last week’s similar decline in new home sales, which are also based on contracts. However, the longer view suggests continued good news for the existing sales market and for builders in 2015." 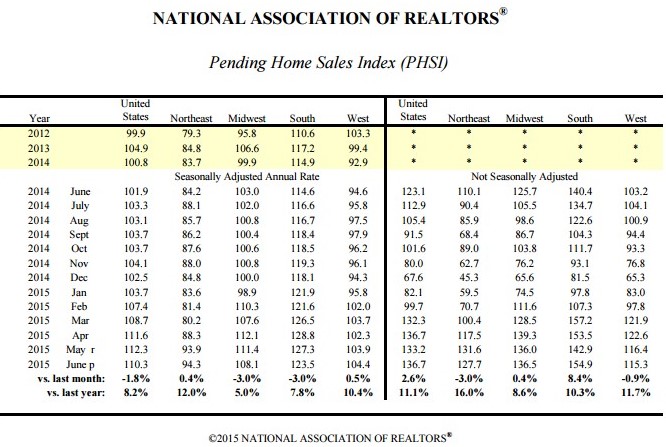