Metros Where Renters Can Afford to Become Homeowners

The homeownership rate in the U.S. is at its lowest rate in more than five decades at 62.9 percent, but according to new research from the National Association of Realtors (NAR), it doesn’t have to be that way.

NAR’s research reviewed employment growth, household income, and qualifying incomes in nearly 100 of the largest U.S. metropolitan areas to find areas with the highest above average employment gains combined with the largest share of renters that can afford to buy a home. What NAR found is that nine of the top 10 metros with the highest share of renters that can afford to purchase a home were located in either the South or Midwest, with three of the markets located in Ohio.

The last few years have seen a spike in the number of renter households, driven by both young adults and those who lost homes to foreclosure in the recession, particularly in areas with robust job creation, according to Lawrence Yun, chief economist with NAR. The result of the increase in renters has been a multi-year run-up in rents in many markets, which has subsequently prevented those renters from achieving homeownership.

“Even in a time of expanding home sales, steady job growth and historically low mortgage rates, the homeownership rate recently tumbled to its lowest level in over five decades as many renters struggle to juggle escalating rents without commensurate income gains,” Yun said. “However, this new study reveals that there are several affordable, middle-tier markets with solid job gains and a large segment of renters who earn enough to buy.”

The only market in the top 10 not located in either the South or Midwest was Ogden, Utah. The top 10 are as follows: 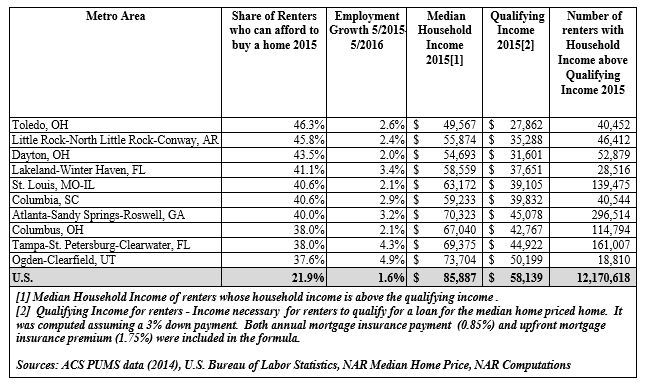 “Overall housing affordability and local job market strength play a pivotal role in a renter's decision on whether to buy a home or sign another lease,” Yun said. “The good news is that other recent NAR survey data shows that those residing in the two regions were the most likely to say that now is a good time to purchase a home. With mortgage rates now at their all-time low, these identified markets are well-suited for the many renters financially capable and interested in taking advantage of the stability and wealth-building benefits owning a home can provide.”

Previous: Rates Retreat Back Toward Record Low
Next: CFPB to Expand on New Servicing Rules at Five Star Conference