Homeowners’ Estimates Rising Along With Appraisals

The gap is shrinking between what homeowners perceive their homes to be worth and the average appraisal, according to data released by Quicken Loans on Tuesday.

Quicken’s Home Price Perception Index (HPPI) for July indicated that appraised home values were an average of 1.69 percent lower than homeowners’ expectations, compared with 1.93 percent in June—indicating that homeowners’ value perceptions did not vary as widely in July as they did in June.

In certain markets, namely many in the West, homeowner perception has not kept up with rising home values, however. In Western cities such as Denver, San Jose, and San Francisco, appraised values were higher than homeowners’ estimates by 3.10 percent, 2.52 percent, and 2.36 percent, respectively, according to Quicken. 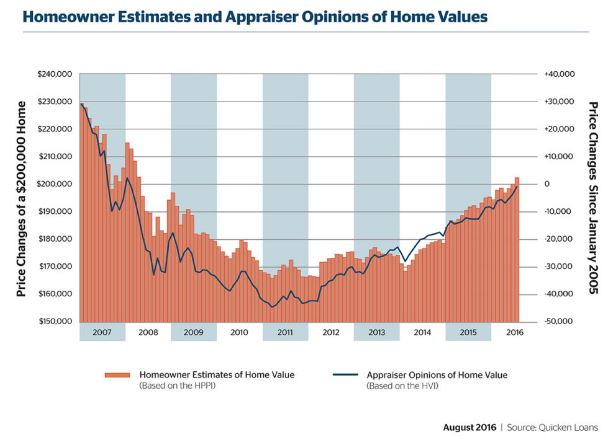 “One of the most important things for consumers to take away from the HPPI is just how regionalized housing truly is,” said Quicken Loans Chief Economist Bob Walters. “While those on the West coast are being surprised by their high appraisals, homeowners in the Northeast and Midwest are more likely to be shocked by their low values. If homeowners keep an eye on local home sales, they can be better aware of their current home value and not be shocked when they go to sell or refinance.”

In addition to the over-the-year increase of 6.24 percent in July for the national HVI, appraisals rose over-the-month in July by 1.43 percent—a faster pace than from May to June, when they increased by 0.84 percent. The over-the-year gain in July continues a year-long trend of strong price appreciation with all four regions experiencing robust growth.

“Home values across the country have been growing at rapid pace, driven by especially enthusiastic buyers this summer,” Walters said. “While the lack of inventory compared to the mass of interested buyers has been the narrative for some time, the effect on the market has intensified as competition for available homes heated up and quickened the pace of rising home values.”