While household debt increased by $35 billion in Q2, the mortgage sector’s share of that debt declined from a huge spike in Q1, according to the latest Quarterly Report on Household Debt and Credit [1], issued Tuesday by the Federal Reserve Bank of New York’s (NYFED) Center for Microeconomic Data. [2]

In the second quarter, consumer debt rose by 0.3 percent to $12.29 trillion, driven mainly by new auto loan and credit card debts. However, national mortgage debt declined by $7 billion. Q1 saw a $120 spike in mortgage debt over Q4 of 2015. 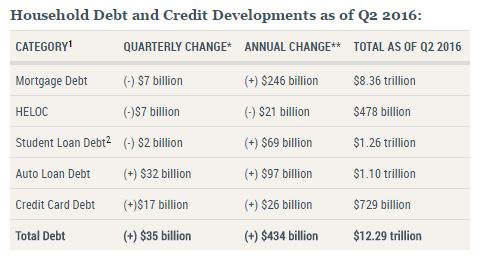 Q2 also saw improvements in overall delinquency rates and another historical low (over the 18 years of the data sample) in new foreclosures. Overall, the New York Fed reported, delinquency rates in Q2‒‒4.8 percent‒‒continued the trend in place since 2010. Q2’s rate of delinquency dropped 5 percent from previous quarter and 5.6 percent compared to Q2 of 2015 2015. There were 82,000 consumers with new foreclosure notations on their credit reports‒‒another low in the 18-year history of this data set.

Of mortgages in early delinquency, 16.1 percent transitioned to 90-plus days delinquent, while 36.9 percent became current.

Non-housing debt balances rose in the second quarter; with increases of $32 billion and $17 billion in auto loans and credit cards, respectively, and a slight decline in student loan balances (-$2 billion).