For the third consecutive quarter, according to NAHB, the Ohio/Pennsylvania metro of Youngstown-Warren-Boardman was rated the nation’s most affordable major housing market, as 91percent of new and existing sales in Q2 were deemed affordable to families making the area’s median income of $53,900. Kokomo, Ind., where 98 percent of sales were deemed affordable to families earning the area’s median income of $60,900, was the most affordable small market in the country in Q2. 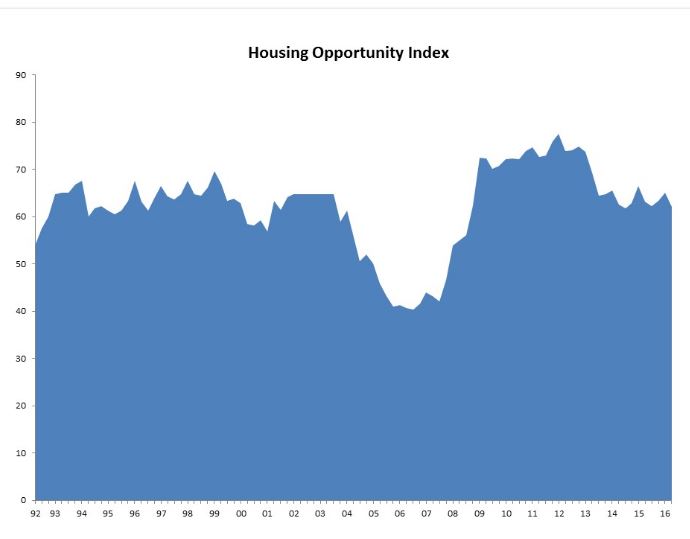 On the other end of the spectrum, the Bay Area was the nation’s least affordable major housing market again. A mere 8.5 percent of homes sold in the second quarter were affordable to families earning the area’s median income of $104,700, and this position as the least affordable market has belonged to the bay area for nearly four full years. San Jose’s median housing price of $1 million, in fact, is the highest in the country, followed closely by an Francisco’s $885,600, according to the National Association of Realtors.

California also had the five least affordable small housing markets in Q2. Santa Cruz-Watsonville, where 14.7 percent of all new and existing homes sold were affordable to families earning the area’s median income of $85,100, topped that section of the list.

Lawrence Yun, chief economist at the NAR, said the lack of affordable houses in many markets has triggered battles for those houses that are affordable.

“Many listings in a majority of markets, especially those in lower price ranges, had multiple offers and went under contract quickly because of severely inadequate supply,” Yun said. “This in turn dented affordability and without a doubt priced out a segment of buyers attempting to seek relief from fast-growing rents.”