The average 30-year FRM has now been below 4 percent for 32 consecutive weeks, the second-longest string in history. The record is 65 weeks, set from March 2012 to June 2013. This week, the cost of a 30-year mortgage inched up this week from 3.43 percent, largely due to good economic news.

“Rates edged higher after a closely watched report on job creation came in strong, surprising economists and markets,” wrote Lorraine Woellert of Redfin. “The upbeat employment news has more people betting the Federal Reserve will raise its own short-term interest rates when it meets in September.”

Many were expecting a rate hike from the Fed in June, but that did not come to pass after May’s jobs disappointing jobs report. The Fed can control the direction of mortgage rates; for example, after they fell to the record low of 3.31 percent in November 2012, they had spiked to over 4.5 percent by September 2013 after the Fed dropped the hint that they would cut back on purchasing mortgage debt. 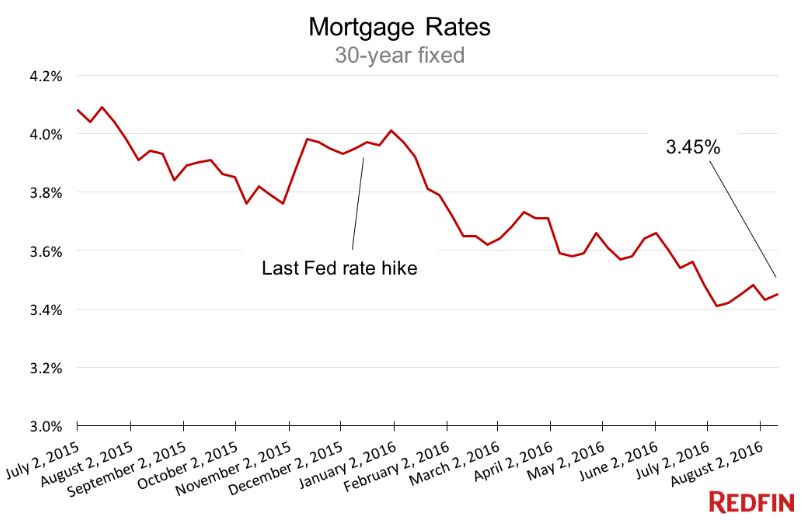 All eyes will no doubt be on the August jobs report from the Bureau of Labor Statistics when it is published on Friday, September 2; a strong report, which would be the third one in a row, could mean that a rate hike from the Fed is in store on September 21.

Even if the Fed raises the federal funds target rate, a spike in mortgage rates is unlikely; Wells Fargo economists wrote in a note to clients that they “doubt the impact on the mortgage market would be as bad is it was in 2013,” according to Woellert. Many Fed policymakers have been hinting that a rate hike is imminent, so financial markets should be ready for it, unlike in 2013.

For now, the average 30-year FRM is expected to remain below 4 percent through the end of the year.

“Borrowing will remain cheap for now and home price growth is slowing, which is good for homebuyers,” Woellert wrote.

Previous: Taking Stock of Housing Affordability
Next: The Week Ahead: Will the Gap Close Between Supply and Demand?