Here is Where Single-Family Homes Sell the Fastest

While the average number of days on the market for a single-family home ticked up from May to June nationwide, according to the most recent existing-home sales report from the National Association of Realtors (NAR), the number of days that a home remains for sale is shrinking in about a third of the states.

About half of the properties that sold in the second quarter were on the market for 30 days or less in 16 states plus the District of Columbia, according to NAR Research Economist Scholastica (Gay) Cororaton.

The majority of the states where half the properties sold in less than a month were located in the West and Midwest. The only three of these states located in the East (besides D.C.) were Massachusetts, Virginia, and Georgia.

Western states included in the group were California, Oregon, Washington, Idaho, Nevada, Utah, and Colorado. Midwestern states where half of single-family houses sold in less than 30 days were Nebraska, Iowa, and Minnesota. Texas was also included in this group.

As to the question of why homes are selling faster in West and Midwest states, the answer lies in the number of new homes that are being built—or rather, aren’t being built.

“It all comes down to housing starts,” said Adam DeSanctis of NAR. “In the Midwest, there's hardly any homes being built. It's more affordable and you have more buyers there than you had a few years ago. In the West, this has been an issue for quite a few years now since the recovery. The economy, for the most part in most of those local markets is very strong. They just aren't building enough homes and not enough people are listing their homes for sale. So what you're seeing is that inventory is tight and homes continue to sell quicker because not enough is being built or put back on the market for existing homeowners to get that supply back up there again.” 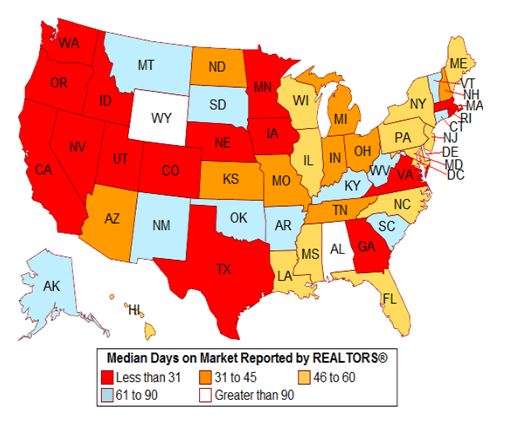 In some states, single-family houses were still taking a while to sell in Q2. Wyoming, Alabama, and Delaware each had an average of more than 90 days for a single-family home to sell during the second quarter; overall in June, 11 percent of properties nationwide were on the market for longer than six months.

Tagged with: Days on the Market Homebuilding Housing Inventory National Association of Realtors